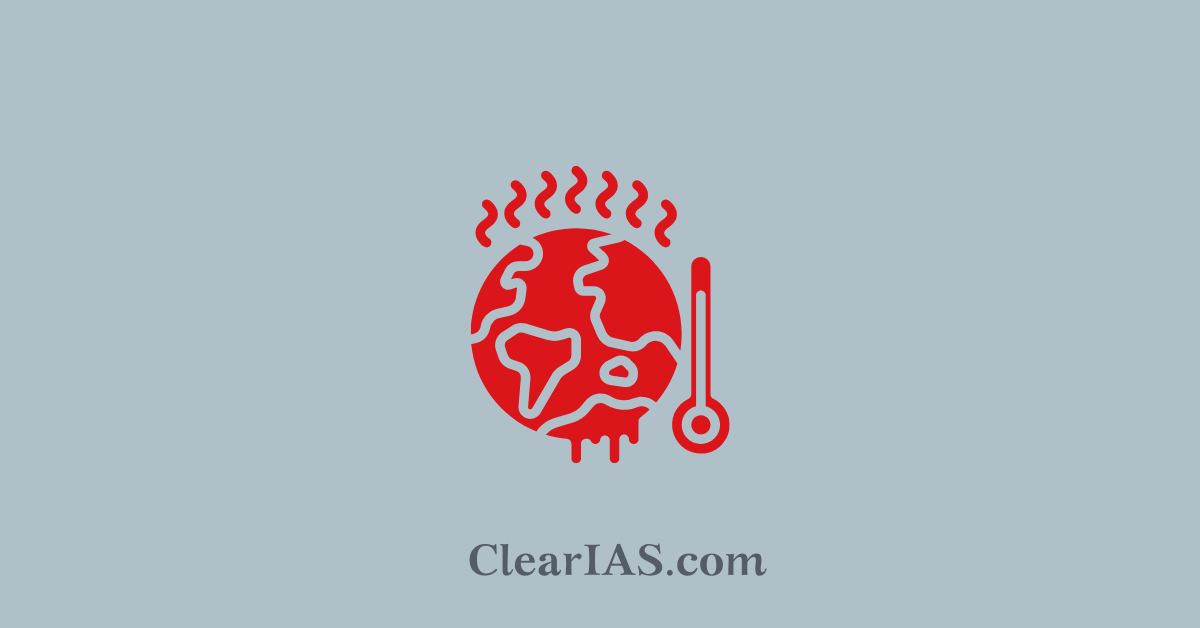 The gradual rise in earth’s temperature known as global warming is typically brought on by the greenhouse effect, which is brought on by elevated amounts of carbon dioxide, CFCs, and other pollutants. It has an immense impact on the global climate as well. Read here to know more about it.

Global warming is the long-term heating of the Earth’s surface observed since the pre-industrial period (between 1850 and 1900) due to human activities.

This term is not interchangeable with the term “climate change.”

Human activities are thought to have contributed to an increase in Earth’s average global temperature of about 1 degree Celsius (1.8 degrees Fahrenheit) since the pre-industrial era.

This temperature increase is currently happening at a rate of more than 0.2 degrees Celsius (0.36 degrees Fahrenheit) per decade.

Human activity since the 1950s has contributed to the current warming trend, which has been accelerating at an unheard-of rate for millennia.

Although these expressions are occasionally used interchangeably, they are not the same.

Climate change is a long-term change in the average weather patterns that have come to define Earth’s local, regional and global climates. These changes have a broad range of observed effects that are synonymous with the term.

Human activities, especially the burning of fossil fuels, which raises the concentrations of heat-trapping greenhouse gases in Earth’s atmosphere and thus increases the planet’s average surface temperature, are to blame for the climate changes that have been observed since the middle of the 20th century.

In addition to internal variability (such as cyclical ocean patterns like El Nino, La Nina, and the Pacific Decadal Oscillation) and external forcings (such as volcanic activity, changes in the Sun’s energy output, and variations in Earth’s orbit), natural processes that have been outweighed by human activities can also contribute to climate change.

Key indicators of climate change are:

The gradual increase in the planet’s surface temperature is known as global warming.

Although this warming trend has been around for a while, the burning of fossil fuels has greatly accelerated its pace over the past century. The amount of fossil fuels burned has increased along with the size of the human population.

Burning fossil fuels such as coal, oil, and natural gas results in the “greenhouse effect,” which affects the atmosphere of Earth.

Global warming is one of the causes of climate change.

The impacts of global warming are being felt everywhere.

The rate of loss could speed up if we keep burning fossil fuels at our current pace, some experts say, causing sea levels to rise several meters in the next 50 to 150 years and wreaking havoc on coastal communities worldwide.

The earth’s ocean temperatures are getting warmer, so tropical storms can pick up more energy.

In other words, global warming can turn a category 3 storm into a more dangerous category 4 storm.

The impact of global warming is also seen in but not limited to:

Even though everyone is impacted by climate change, not everyone is equally impacted. Typically, those who are indigenous, persons of color, or economically marginalized are severely harmed. Even though these same groups have made the least effort to contribute to climate change, they are more exposed to its severe effects due to inequities embedded into our housing, healthcare, and labor systems. This is known as environmental racism.

In recent years, China has taken the lead in global-warming pollution, producing about 26 percent of all CO2 emissions.

The United States comes in second. Despite making up just 4 percent of the world’s population, the nation produces about 13 percent of all global CO2 emissions which is nearly as much as the European Union and India (third and fourth place) combined.

And America is still number one, by far, in cumulative emissions over the past 150 years. As a top contributor to global warming, the United States must help propel the world to a cleaner, safer, and more equitable future.

Levels of the two most important anthropogenic greenhouse gases, carbon dioxide, and methane, continued their unrelenting rise in 2020 despite the economic slowdown caused by the coronavirus pandemic response.

Moving away from fossil fuels is the first step in preventing climate change. Renewable energy sources including solar, wind, biomass, and geothermal need to be highlighted.

Producing clean energy is crucial, but it’s as necessary to use more cost-effective technologies to reduce our energy and water usage, such as LED lightbulbs and cutting-edge shower systems.

Both the construction of new low-energy buildings and the renovation of existing structures are required to reduce the CO2 emissions from buildings, which are brought on by heating, cooling, hot water, and lighting.

It should also be a primary goal to promote more efficient use of natural resources, halt widespread deforestation, and improve the sustainability and productivity of agriculture.

Developing responsible consumption habits is essential, whether it’s for food (especially meat), apparel, cosmetics, or cleaning supplies. Last but not least, recycling is a crucial component of waste management.

Q. Discuss global warming and mention its effects on global climate. Explain the control measures to bring down the level of greenhouse gases that cause global warming, in the light of the Kyoto Protocol, 1997. (Answer in 250 words) 15 marks (GS Paper 3, 2022)