The ongoing tensions between China-Taiwan and their effect on China-US relations is an important discussion on the global forum. Read here to understand the global implications of the conflict.

The China-Taiwan issue has escalated to war like situation after the visit of US House Speaker Nancy Pelosi in August 2022.

Taiwan, officially known as the Republic of China (ROC), is an island separated from China by the Taiwan Strait. It sits in the so-called “first island chain”, which includes a list of US-friendly territories that are crucial to US foreign policy.

It has been governed independently of mainland China, officially the People’s Republic of China (PRC), since 1949.

The PRC views the island as a renegade province and vows to eventually unify Taiwan with the mainland.

In Taiwan, which has its own democratically elected government and is home to twenty-three million people, political leaders have differing views on the island’s status and relations with the mainland. 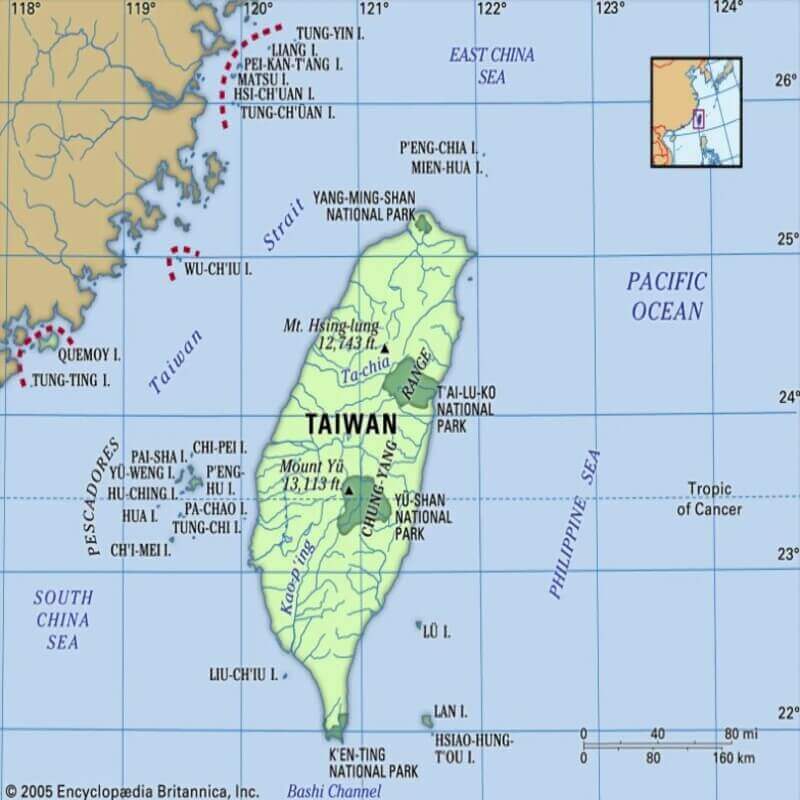 The first known settlers in Taiwan were Austronesian tribal people, who are thought to have come from modern-day southern China.

The island was first mentioned in Chinese records in 239 CE when an emperor sent an expeditionary force to explore the area.

Then Taiwan was administered by China’s Qing dynasty from 1683 to 1895.

The largest demographic groups on the island now are Hakka Chinese who fled the mainland in the 17th century.

The Qing dynasty had to surrender Taiwan to Japan in 1895 after it lost in the First Sino-Japanese War.

After World War II, Japan surrendered and relinquished control of territory it had taken from China. The Republic of China (ROC) which was one of the victors in the war began ruling Taiwan with the consent of its allies, the US and the UK.

During the civil war in China, Mao Zedong’s Communist army took the reign of the mainland by defeating the Kuomintang (KMT). The remnants of the KMT government and their support fled to Taiwan in 1949.

They established a government in exile in Taiwan which led the island for the next 25 years. The successors allowed more democratization over the years as the locals protested against the authoritarian rule.

President Lee Teng-hui, known as Taiwan’s ‘father of democracy, led constitutional changes, which eventually made way for the election of the island’s first non-KMT president, in 2000.

The present-day conflict arose out of the fact that the ROC government-in-exile at first claimed to represent the whole of China, which it intended to re-occupy. It held China’s seat on the United Nations Security Council and was recognized by many Western nations as the only Chinese government.

But by the 1970s some countries began to argue that the Taipei government could no longer be considered a genuine representative of the hundreds of millions of people living in mainland China.

Then in 1971, the UN switched diplomatic recognition to Beijing and the ROC government was forced out. In 1978, China also began opening up its economy. Recognizing opportunities for trade and the need to develop relations, the US formally established diplomatic ties with Beijing in 1979.

Since then the number of countries that recognize the ROC government diplomatically has fallen drastically to about 15.

Now, despite having all the characteristics of an independent state and a political system that is distinct from China, Taiwan’s legal status remains unclear.

By the 1980s Taiwan relaxed rules on visits and investments in China. In 1991, it proclaimed that the war with the People’s Republic of China was over.

China proposed the so-called ‘one country, two systems’ option, which it said would allow Taiwan significant autonomy if it agreed to come under Beijing’s control.

In 2000, the Democratic Progressive Party (DPP) came into power in Taiwan which promoted the idea of independence which alarmed mainland China.

In 2008, KMT came into power and tried to restore the one China system through economic relations.

In 2016 the current President of DPP came into power hence re-affirming the idea of independence again.

Since 2018, Beijing had been putting pressure on international companies and forums to list Taiwan as part of China.

By 2020, Hong Kong had seen months of protests against the growing influence of mainland China on the island.

Later that year China’s implemented a national security law in Hong Kong which was another sign of Beijing’s assertion.

Economically, the trade and investments between Taipei and Beijing have been increasing. This causes the Taiwanese to worry that their economy is now dependent on China.

Role of the US in the China-Taiwan issue

In 1979, the United States established formal diplomatic relations with the PRC. At the same time, it severed its diplomatic ties and abrogated its mutual defense treaty with the ROC.

Officially, the US acknowledges the “One-China” policy, which recognizes only one Chinese government in Beijing and has formal ties with Beijing rather than Taipei.

But Washington’s actions have been that of strategic ambiguity where it has proclaimed that it would intervene militarily if China were to invade Taiwan. The US has also pledged to supply Taiwan with defensive weapons. Beijing has repeatedly urged Washington to stop selling weapons and cease contact with Taipei.

The Trump administration had increased the arms trade to Taiwan which escalated tension between China-Taiwan and the Biden administration is continuing the weapons trade with Taipei.

The issue of Taiwan has strained the relations between US and China. Beijing has condemned the support of Washington to Taipei and has increased military exercises around Taiwan Strait in recent times.

The visit of US house speaker Nancy Pelosi to Taiwan has heightened the tensions between the countries.

China rejects Taiwan’s participation as a member in UN agencies and other international organizations that limit membership to states. Taipei regularly protests its exclusion; the United States also pushes for Taiwan’s meaningful participation in such organizations.

Amid the COVID-19 pandemic, Taipei criticized the World Health Organization (WHO) for giving in to Beijing’s demands and continuing to bar Taiwan—which mounted one of the world’s most effective responses to COVID-19 in the first two years of the pandemic—from attending the organization’s World Health Assembly as an observer. Ministers from the Group of Seven (G7) countries have called for Taiwan’s inclusion in WHO forums.

Taiwan does, however, hold member status in more than forty organizations, most of them regional, such as the Asian Development Bank and the Asia-Pacific Economic Cooperation forum, as well as the World Trade Organization. It holds observer or another status on several other bodies.

The US-Taiwan relations are fuelling the military assertiveness of China in the Taiwan Strait. Such conflict has the potential to lead to a US-China confrontation.

The cross-strait tensions can have a negative impact on Taiwan’s vital semiconductor chip manufacturing industry. Companies in Taiwan were responsible for more than 60 percent of the revenue generated by the world’s semiconductor contract manufacturers in 2020.

Taiwan Strait is one of the major global trade routes with almost 20% of global trade passing through the strait. Any military activity between China-Taiwan will disrupt the global supply chain creating a crisis on the international stage.

India’s stand on the China-Taiwan issue

India does not have formal diplomatic ties with Taiwan yet as it recognizes the One China policy. But since 1995, both sides have maintained representative offices in each other’s capitals that function as de facto embassies.

But as India-China ties have been under stress lately, India has been playing up its relationship with Taiwan.

As a part of India’s Act East Foreign Policy, India has sought to cultivate extensive ties with Taiwan in trade and investment as well as developing cooperation in science & technology, environmental issues, and people-to-people exchange.

The Russian-Ukraine war is been observed by the world and especially in China, so Beijing will analyze the consequences of the ongoing war before any action against Taiwan. But the Chinese economy is far more than the Russian economy hence that will also be taken into consideration.

Any escalation in the Taiwan Strait will affect the whole Indo-Pacific security and trade.

Countries like Japan, and Australia have urged China to cease the military exercises and missile test fires around Taiwan, which shows that Chinese aggression has started affecting the nations already.