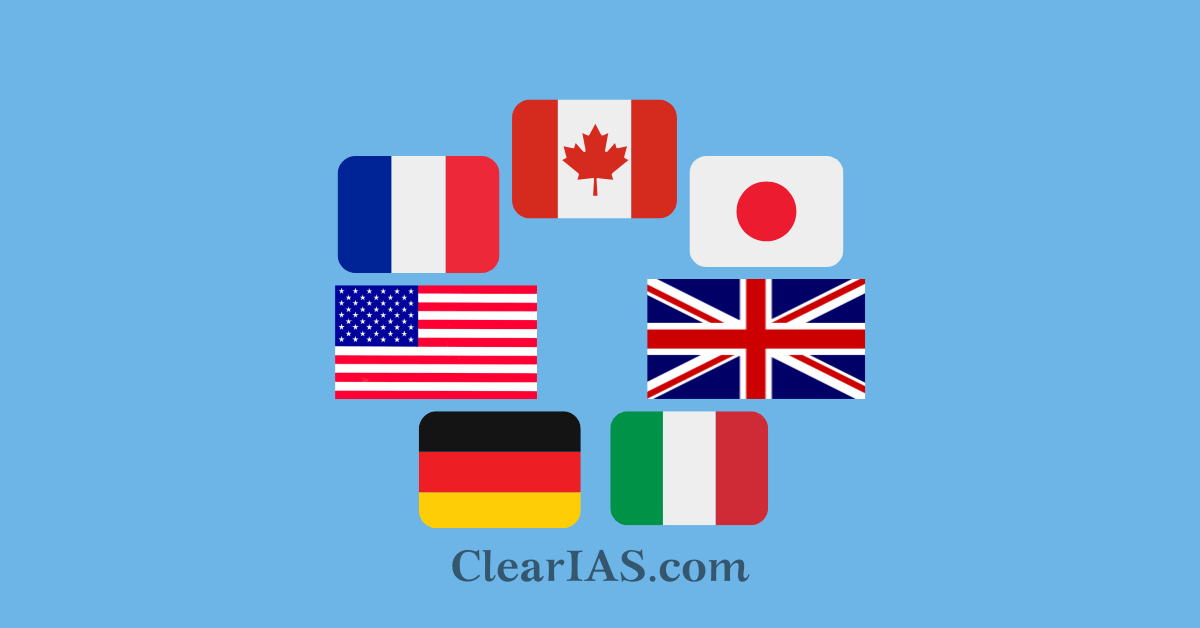 The G7 is an informal forum of leading industrialized nations. Read here to know the history and significance of the forum.

The Prime Minister of India is in Germany to attend the Group of Seven (G7) Summit at Schloss Elmau, a century-old retreat in a nature reserve in the Bavarian Alps.

For this year’s summit, German Chancellor Olaf Scholz has invited India, along with Argentina, Indonesia, Senegal, and South Africa as partner countries.

The G7, originally G8, was set up in 1975 as an informal forum bringing together the leaders of the world’s leading industrial nations.

The concept of a forum for the capitalist world’s major industrialized countries emerged before the 1973 oil crisis.

The informal gathering of senior financial officials from the U.S., U.K., West Germany, Japan, and France became known as the “Group of Five”.

The participants exchanged ideas on the economic problems of the 1970s  like the first oil crisis and the collapse of the system of fixed exchange rates (Bretton Woods) and agreed on international economic policy and initial measures to fight the global downturn.

In 1976, Canada was also invited to join the group and the first meeting with all G-7 nations was hosted by the United States which was held in Puerto Rico in 1976.

In 1977, the United Kingdom, which hosted that year’s summit, invited the European Economic Community (later incorporated into the EU) to join all G7 summits; beginning in 1981, it had attended every gathering.

In 1997, Russia joined the grouping making it G-8. This was a signal of cooperation between East and West after the Soviet Union’s collapse in 1991.

Later Russia was expelled from the grouping in 2014 following the annexation of Crimea. The group went back to being G-7 again.

There are no formal criteria for membership, but participants are all highly developed democracies.

Summits are held annually and hosted on a rotation basis by the group’s members. The host country not only has the G7 presidency but also sets the agenda for the year.

The annual G7 summits have over the years developed into a platform for determining the course of multilateral discourse and shaping political responses to global challenges.

It complements the role of the G20, which is widely regarded as the framework for ongoing global economic coordination. The G-7 mainly has to do with politics, the G-20 is a broader group that focuses on the global economy. It’s also known as the “Summit on Financial Markets and the World Economy” and represents 80% of the global GDP.

The summit gathers leaders from the European Union and the following countries:

It is capable of setting the global agenda because decisions taken by these major economic powers have a real impact. The political direction set by these leaders on a policy issue will have a “ripple” effect across many other international organizations and institutions.

Thus, decisions taken at the G7 are not legally binding but exert strong political influence.

The aggregate GDP of G-7 member states makes up nearly 31% of the global economy, 10% of the world’s population, and 21% of global carbon dioxide emissions.

In all G7 countries, annual public sector expenditure exceeded revenue in 2021. Most G7 countries also had a high level of gross debt, especially Japan, Italy, and the US.

The G7 countries are important players in global trade. The US and Germany in particular are major export nations.

During the 1980s, the G7 broadened its areas of concern to include issues of international security, human rights, and global security; for example, during this period, the G7 concerned itself with the ongoing Iran-Iraq War and Soviet occupation of Afghanistan.

In response to mounting concern over money laundering, the Financial Action Task Force on Money Laundering (FATF) was established by the G-7 groping in Paris in 1989.

In the 1990s, it launched a debt-relief program for the 42 heavily indebted poor countries (HIPC); provided $300 million to help build the Shelter Structure over the damaged reactor at Chornobyl, and established the Financial Stability Forum to help in “managing the international monetary system”.

After the G7 meeting in Berlin in May 2022, the climate, energy, and environment ministers made a new pledge to decarbonize electricity sectors by 2035.

Their decision was based on the backdrop of the ongoing Russo-Ukrainian War which has given a renewed sense of urgency to expedite the transition to cleaner energy sources.

Over the years, the G7 has faced several geopolitical challenges that have led some international analysts to question its credibility or propose its replacement by the G20.

The forum’s small and relatively homogenous membership promotes collective decision-making, but critics note that it often lacks follow-through and that its membership excludes necessary emerging powers.

Russia’s actions are one of the biggest challenges faced by the grouping and the actions against the Ukraine Invasion haven’t been strong enough.

Alongside the Russia challenge, there is a growing sense that China poses a “threefold threat” to G7 countries- economically, ideologically, and geopolitically.

The build back better world was announced last year to counter the BRI but the idea fell through. This year again another global infrastructure funding plan of 600 billion dollars has been unveiled to rival the BRI.

G7 still has value because all member countries are grappling with similar issues.  The 2022 summit concentrates more on the war in Ukraine and the need to reduce dependence on Russian energy, especially in Europe.

Additionally, the bloc faces a looming global food crisis from the war, which has already resulted in shortages of wheat and other crops. G7 members are also contending with surging energy prices, contributing to record inflation.

Climate concerns are always a part of such forum discussions but they may take a backseat this time due to the energy crisis.