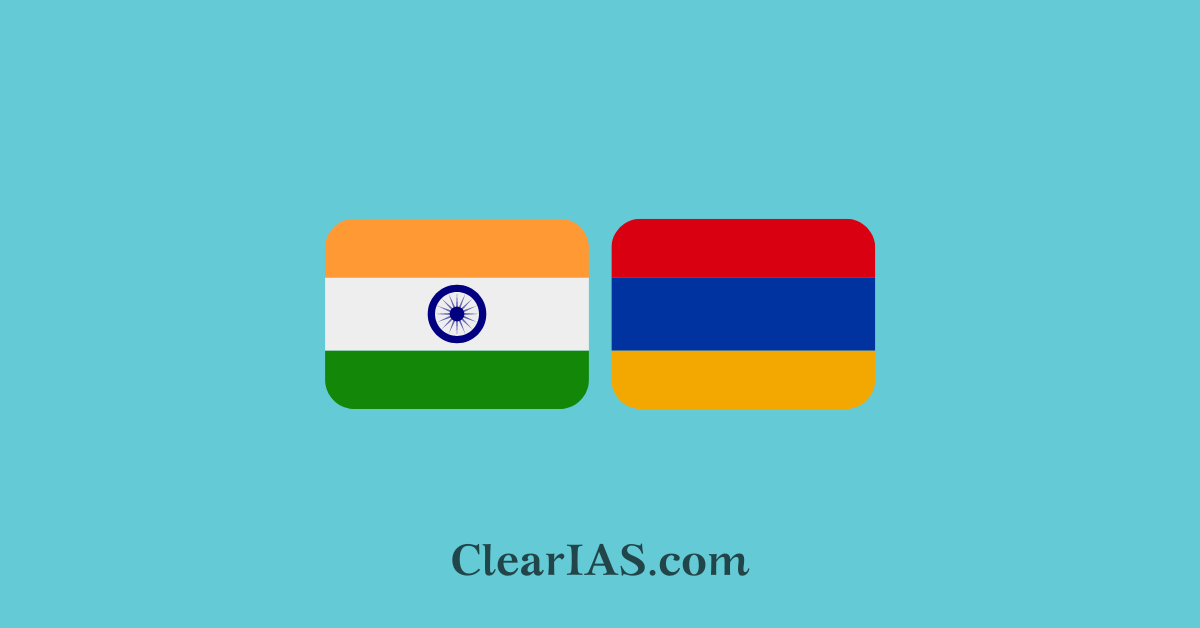 Armenia lost to Azerbaijan in the 2020 conflict over Nagorno-Karabakh, increasing its economic and political isolation.

Armenia’s inadequate infrastructure prevented it from participating in China’s Belt and Road Initiative, and Chinese expenditures were instead directed toward Baku rather than Yerevan.

India profited from this because Yerevan has worked to forge relationships with developing Asian nations to diversify its commercial and political links.

According to literary evidence, Indian settlements in Armenia existed as early as 149 BCE. Thomas Cana is said to be the first Armenian to have landed on the Malabar coast in 780 CE.

Before the Dutch and the English appeared in India, a few Armenian traders had come to Agra during the Mughal Empire. Emperor Akbar, highly appreciative of the commercial talents and integrity of the Armenians, granted them numerous privileges and considerable religious freedom as also an opportunity to serve in his empire in various capacities.

By the Middle Ages, the Armenian towns of Artashat, Metsbin, and Dvin had become important centers for barter trade with India which exported precious stones, herbs, and textiles to Armenia and obtained hides and dyes in return.

The Armenian colony in India increased in size, wealth, and importance throughout the 17th century. They also entered Indian trade in varying relationships with the East India Company.

The Armenians made some contributions in the areas of artisanship including gun-making and printing.

The high level of education among the Calcutta Armenians enabled them to perform well in the legal profession as well.

One of Emperor Akbar’s queens has been mentioned to be an Armenian, called Mariam Zamani Begum.

After India’s independence, many Armenians migrated to Australia, the USA, and other places. The vestigial Armenian community in India is now mainly settled in Calcutta with sprinkling in Mumbai, Delhi, Agra, and Chennai.

After the breakup of the USSR, India recognized Armenia on December 26, 1991, three months after it declared independence.

India will benefit greatly from deeper economic collaboration with Armenia as it can provide a potential outpost for India in a contest for global supply chains in the Eurasian corridor from the Persian Gulf to Russia and Europe.

The level of bilateral trade and investments remains below potential though some growth has been registered in recent years.

Armenia can also prove to be a valuable development partner for India in industries like manufacturing, agriculture, medicines, and technology.

The partnership can serve as an excellent replacement for the Chinese Belt and Road Initiative model, which is fueled by debt.

Yerevan’s expanding procurement of Indian defence technology will give both the public and commercial defence manufacturing sectors in India a boost.

In 2020, Armenia signed a USD 40 million arms deal with India for the supply of four Swathi radars to detect the location of weapons.

In October 2022, India signed an agreement with Armenia to export missiles, rockets & ammunition.

This recent arms deal between India-Armenia has many geopolitical implications in the South Caucasus region and beyond.

For Armenia, India is a potential partner in pushing the offensive by the Turkey-Azerbaijan-Pakistan alliance.

With recent military equipment deliveries to Armenia, New Delhi has made it clear that it supports Yerevan in the Nagorno-Karabakh conflict and has opted to oppose Azerbaijan and all of its allies, including Turkey and Pakistan, as well as Ankara’s expansionist pan-Turkic ambitions.

India’s support to Armenia is an indirect way to counter Pakistan as well since Pakistan has been supplying military assistance to Azerbaijan against Armenia.

Given India’s newly discovered willingness to take sides rather than adhering to the non-aligned strategy while pursuing its interests abroad, New Delhi’s internal policy challenges, particularly Kashmir, provide a potent signal to Ankara to shift course.

Cooperation between India-Armenia has the potential to be a key component of Armenia’s broader relationships with advanced democracies. To achieve these goals, excellent and deft diplomacy is essential.

Hence, relations between Armenia and India have constituted a strategic priority for both nations transcending through cooperation in the implementation of the modernization theory, institutionalization, and strengthening of national defense.