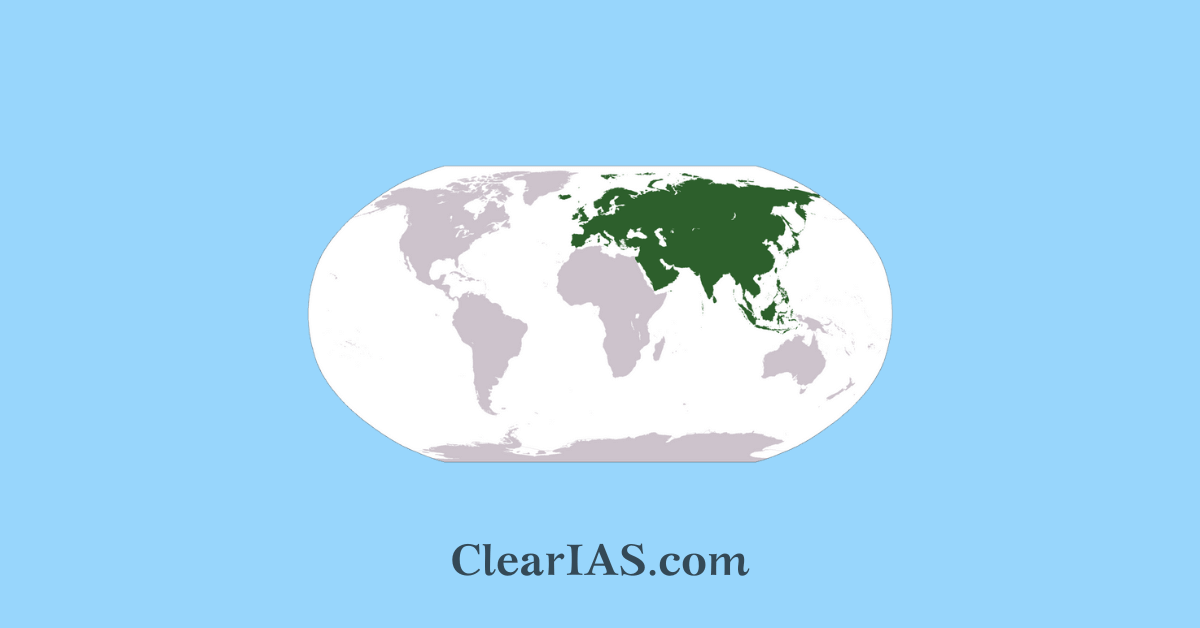 The current geopolitical scenario has ramped up the importance of the Eurasian region. Thus, India-Eurasia relations become a pertinent aspect as India is one of the fastest-growing economies in the region. The Indo-pacific and Eurasian policy has gained the spotlight in past years due to the geopolitical shift in balances. Read here to understand more about the India-Eurasia ties.

The entirety of Europe and Asia make up the largest continental area on Earth, which is known as Eurasia. Some geographers contend that physiographically, Eurasia is one continent.

Although Europe and Asia have been thought of as separate continents since antiquity, their borders are arbitrary and have historically been vulnerable to alteration.

Recently, several nations, including Japan, South Korea, Australia, and others, have made efforts pointing to an increasing emphasis on improved relations between European and Asian nations.

With an average yearly per capita income growth rate of roughly 4-5% over the previous few years, Eurasia has been one of the world’s most economically active areas.

China is working hard to establish a new economic system and security measures without the US as part of its effort to establish a China-centric Asian order.

A tilt in Russia’s foreign policy toward Asia has resulted from the Ukrainian crisis, which signified a substantial change in the global order.

Washington is starting to evaluate its strategic ties to Eurasia as China’s maritime concerns in the Indo-Pacific region grow.

Iran, another US foe, is being drawn in by China and Russia more and more.

In response, China and Russia are forging a power bloc in Eurasia.

Numerous ancient civilizations, such as those in Mesopotamia, the Indus Valley, and China, which engaged in trade and cultural exchange, were based in Eurasia.

Due to shared customs and shared Buddhist culture, the inhabitants of Siberia and the Indian Himalayas have strong historical and cultural parallels.

There are records of the long-standing relationship between India-Eurasia that resulted from the partnership of the Sangha and the Shreni (trade associations) during the Buddhist era.

Intensive Indian diplomacy in recent years has helped Delhi’s Indo-Pacific policy gain political and institutional traction. It must now put the same amount of effort into creating a “Eurasian” policy.

The recalibration of India’s continental strategy is involved in Eurasia, while the Indo-Pacific is about Delhi’s new marine geopolitics.

Significance of Eurasia for India

Following the Taliban’s takeover of Afghanistan, it is crucial to engage with Eurasia to find regional cooperation in the fight against dangers including terrorism, drug trafficking, and radicalism.

The Eurasian region wants to become less reliant on both Moscow and Beijing. In light of this, they are ready to assist India in its efforts to improve its standing in the area and offer a viable alternative to the established actors Russia, China, the EU, and the US.

India’s extended neighborhood includes Central Asia, the center of the new Eurasia, and it is extremely important to India strategically.

Achieving security in the region is in India’s interest given the threat of terrorism, drug trafficking, and the smuggling of armaments, among other things.

The subcontinental partition and India’s physical separation from inner Asia cut off the country from Eurasian geopolitics.

Beijing has established itself in a fairly powerful position over the entire Eurasia region thanks to ever-expanding commerce with the EU, massive infrastructure projects like the BRI, supremacy in the industrial supply chain, etc.

Major transportation projects like the INSTC, Ashgabat Agreement, Chabahar Port, and others are delayed for a variety of reasons, including a lack of money, confidence concerns, and western sanctions against Iran and Russia.

The security and stability of the entire region are being impacted by the current crises in Belarus, Ukraine, the Caucasus, and Kazakhstan.

Over 11% of India’s overall trade is conducted on a bilateral basis with the Gulf Cooperation Council (GCC) and the Association of South East Asian Nations (ASEAN).

India can serve as a counterbalance despite the Indo-Pacific area receiving more attention, and it has a wonderful chance to further develop its position in Eurasia.

India’s Eurasian policy must unavoidably involve more interaction with NATO and the EU. A significant step in establishing a long-term security conversation with Europe will be the establishment of a dedicated military office within the Indian mission to Brussels, which is home to both the EU and NATO.

Enhancing multi-vector projects in this region could have political and economic repercussions because more active participation will also lead to the creation of an alternative to Chinese economic expansion, which to some extent alarms the Central Asian leaders. The influence of China in the region is also a major hindrance to growth in India-Eurasia relations.

India must make use of the BRICS, SCO, and RIC platforms as essential members to advance strategic cooperation with China, Russia, and Central Asia.

India-Eurasia relations will greatly depend on India’s strategic partnership with Arabic and Persian nations. These alliances will help India counter the Pakistan-Turkey partnership.