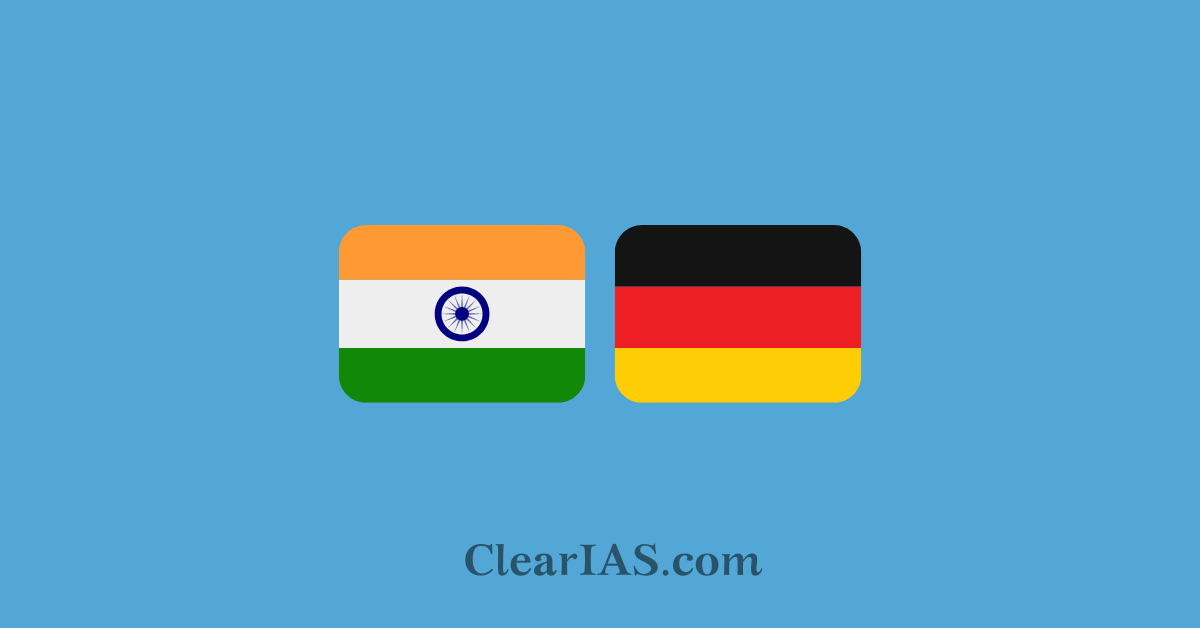 The bilateral relations between India-Germany have become globally important due to the G4 strategic partnership between them.

Both countries along with Brazil and Japan have formed the Group of 4 countries to push for reforms and expansion of the UNSC.

In the last decade, both political and economic interaction between Germany has enhanced significantly. Today, Germany is amongst India’s most important partners both bilaterally and in the global context.

The 6th IGC was held in May 2022 and several important agreements were inked:

Commercial relations between India and Germany date back to the early 16th century when German trading companies from Augsburg and Nuremberg, developed new sea routes around Africa, as they sailed in search of precious stones and spices.

Thereafter, a number of German companies were established with the purpose of trading with India and other Asian countries in the 16th and 18th centuries.

During world war I when India was part of the British crown. The independence activists of Indian armies sent to fight for the British forces against Germany sought German help in procuring Indian freedom, leading to the Indo-German conspiracy (1914-17).

The Allies’ war effort enlisted millions of British Indian volunteers during World War II. Subhas Chandra Bose launched a concerted effort to win India’s independence from Britain by enlisting the help of the Axis countries. The Indische Legion, which was primarily composed of British Indian prisoners of war and expatriates in Europe, was established to act as a liberating army for British-ruled India.

The relationship, based on common values of democracy and rule of law has strengthened significantly in the 1990s following India’s economic liberalization and the end of the Cold War.

Since India embarked on a course of reform and opened up its economy in 1991, the volume of trade between the two countries has increased rapidly.

India and Germany maintain an ongoing dialogue in the areas of commercial maritime security and cooperation in the field of anti-terrorism.

An anti-piracy cooperation agreement between the two nations was signed in 2006.

The Indian Navy and the German Navy conducted joint exercises in 2008 for the first time. In 2021, this joint exercise was carried out in the Gulf of Aden.

Fighter jets from the German and Indian air services participated in the recent multinational military exercise “Pitch Black 2022” in Australia.

Following the signing of an agreement between the two countries in 1956, Germany assisted in the establishment of the Indian Institute of Technology Madras and strengthened its cooperation, supply of technology, and resources over the years to assist in the institution’s expansion.

Both nations established the Indo-German Science and Technology Centre in New Delhi to promote joint research and development in energy, environment, coal, and water technologies.

India and Germany have signed an MoU regarding the teaching of the German language in Kendriya Vidyalaya schools in India and the reciprocal introduction of Sanskrit and modern Indian language in government schools in Germany.

Indo-German Science & Technology cooperation (IGSTC) started with the signing of the Intergovernmental S&T Cooperation Agreement in 1971 and 1974.

Today, Germany is one of the most important global partners of India for S&T cooperation.

Germany had recognized India as a strategic partner in the Indo-Pacific region especially when the region is gaining importance in the geopolitics of the globe.

The India-Germany partnership has the potential to resolve global issues like food security, energy, defense security, and green development.