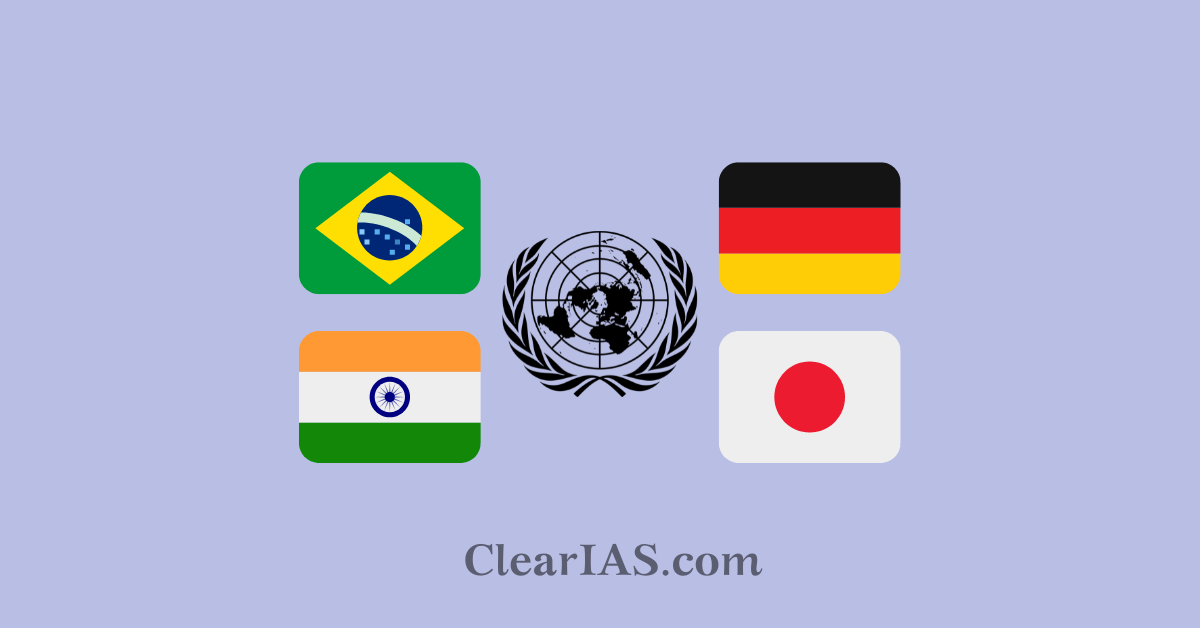 The G4 is a group of four countries- Brazil, Germany, India, and Japan– aspiring to become permanent members of the United Nations Security Council (UNSC). The grouping was formed in 2005.

On the opposing side is the Uniting for Consensus nicknamed the Coffee Club, which has been against the expansion of the permanent seats of UNSC since the 1990s.

What is the purpose of G4 countries’ grouping?

China, France, Russia, the United Kingdom, and the United States, the victors of World War II, are the UN’s five permanent members with veto power in the Security Council.

The G4 nations are supporting one another’s claims for UNSC permanent membership.

The G4 countries often get together after the yearly high-level UN General Assembly session.

The permanent member seats on the Security Council are the G4’s main goal, in contrast to the G7, which shares the economy and long-term political goals.

Since the UN’s founding, each of these four nations has been one of the council’s chosen non-permanent members.

Their economic and political clout has increased dramatically during the past few decades, fast approaching that of the permanent members (P5).

All the G4 countries have been elected to the non-permanent seats of UNSC multiple times over the years. The non-permanent members are elected for two years regularly, and each of the G4 members has served more than a decade in UNSC since its inception.

Outcomes of the recent meeting:

IGN is a collection of national governments working within the UN to enhance the Security Council’s reform.

The IGN is composed of several different international organizations, namely:

The United Kingdom, France, and United States supported the G4’s bid to expand permanent and non-permanent seats of the UNSC.

All five members have at different points supported India’s claim to permanent membership but with conditions attached to their agendas. For example, China would support India but not Japan.

Opposition to G4: the Coffee Club

The Uniting for Consensus (UfC), or the Coffee Club, emerged in the 1990s in opposition to the potential extension of permanent seats on the UN Security Council.

Under the direction of Italy, it seeks to oppose the applications for permanent members put out by the G4 countries and is requesting a consensus before any decision is made regarding the structure and makeup of the Security Council.

Italy, along with Pakistan, Mexico and Egypt founded the Coffee Club in 1995 to reject the proposal to increase the number of permanent seats in the UNSC.

The Uniting for Consensus group contends that an increase in permanent seats will exacerbate the inequality among the member nations and lead to the cascading expansion of several privileges.

Other core members of this grouping are: Canada, Spain, Turkey, Argentina, and Malta.

The need for UNSC reforms

The global scenario has changed a lot since World War II, and the economic balance has shifted. The G4 countries are the best example of such a shift of balance.

Other global powers are growing faster economically and will beat the P5 also. Hence, it is necessary to reform the Council concerning the current trend.

The inability of the Security Council to effectively address the challenges vividly demonstrates the urgent need for UN Security Council reform to better reflect contemporary geopolitical realities, and to enhance its effectiveness and the legitimacy and implementation of its decisions.

The IGN is constrained by a lack of openness and transparency and must be guided by the decision-making requirements and working methods laid out in the Charter of the United Nations and the rules and procedures of the General Assembly.

All in all, the presence of more developing nations is required to enhance the reach and response of the council effectively.