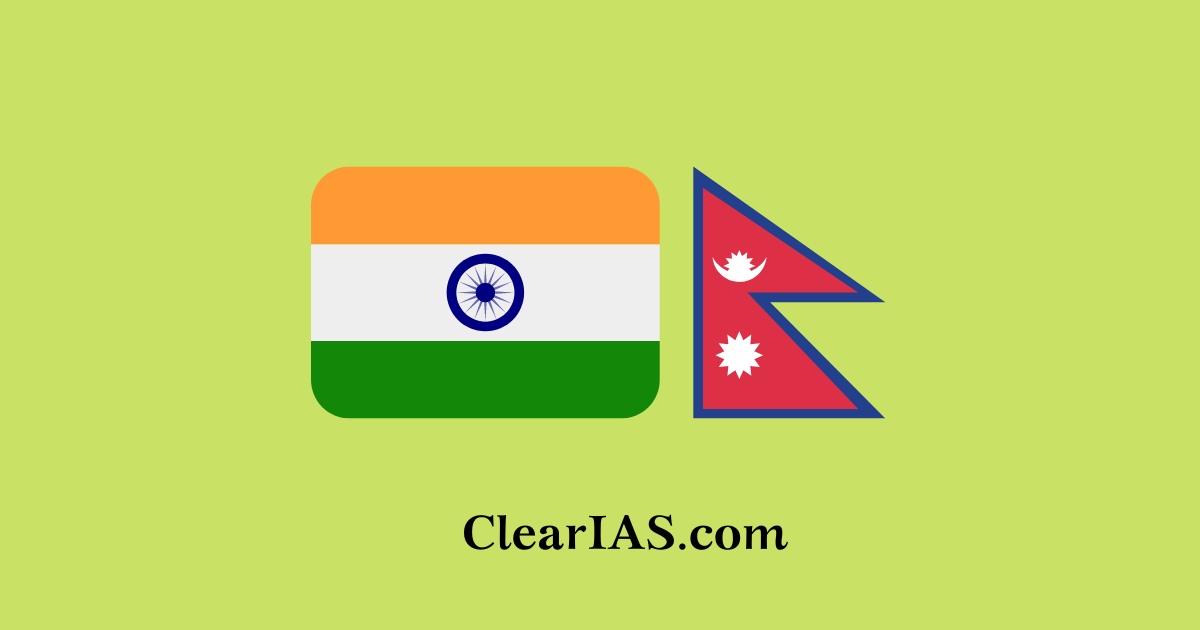 India-Nepal relation is a relation between Roti and Beti. There is a civilizational connection from Lumbini to Bodhgaya and from Pashupatinath to Kashi Vishwanath. India and Nepal share common terrain and common culture. They are linked by marriage and mythology. Read to know more about India-Nepal Relations.

India and Nepal are lost in each other’s intestines. This shows the closeness between the two countries. India and Nepal have all reasons for a good relationship.

However, Nepal is the second country after Pakistan which held that its relations with China are higher than Mount Everest.

Areas of Significance of India-Nepal Relations :

Trade and Economy: India is Nepal’s major trading partner and the largest source of foreign investment. It serves as a transit country for nearly all of Nepal’s trade with third countries.

Connectivity: Tibet, which has very little road connectivity, is open on one side of landlocked Nepal. It is also encircled by India on three sides.

Defense Cooperation: Through the provision of equipment and training, bilateral defense cooperation helps the Nepalese Army in its modernization.

Cultural: Initiatives have been made to encourage interpersonal connections between various local organizations in Nepal in the fields of academia, media, and art & culture. India has signed three sister-city agreements for Kathmandu-Varanasi, Lumbini-Bodhgaya, and Janakpur-Ayodhya.

Humanitarian aid: Nepal is located in an ecologically fragile region that is vulnerable to earthquakes and floods. It continues to be the principal beneficiary of humanitarian aid from India.

The weakness of India-Nepal Relations:

The biggest problem is closeness. Closeness if not handled with sensitivity creates many problems. In reality, India does not have a Nepal policy. The Nepal policy is a subset of our China policy.

We always see Nepal through the prism of China. And even in the age of complex interdependence, we tend to look Nepal China relations with a zero-sum approach.

It shows nothing but a lack of confidence, which gives room to Nepali politicians to play the China card. Our policy or approach in Nepal resembles Pakistan’s approach in Afghanistan.

India wants whosoever rules Nepal should be completely controlled by India. Thus, India’s insecurity results in a lack of a second policy toward Nepal.

Pandit Nehru who talked about Panchsheel, non-interference in domestic affairs, and non-alignment had no hesitation in declaring at the Indian Parliament that India’s security would have priority over Nepal’s sovereignty.

He openly held that we cannot tolerate Nepal following a policy of equal distance.

Nepali should not be allowed to have an intimate relationship with any other country. However, India could not ensure Nepal moved toward China.

On the other hand, the Nepali politician calls Nepal a YAM between two large boulders. It wants to take advantage of the unique location between the two Asian giants- the elephant and the Dragon.

Problems when India deals with Nepal:

Nepal is politically unstable and has extremely fractured politics. If there is political stability and a manageable fraction, it is easy for any country to deal with Nepal.

There is a lack of professionalism on the part of India. Most of the ambassadors have been from UP and Bihar. They have family ties and hence they are unable to get the right perspective of the ground-level situation

Since India feels extreme insecurity it avoids leaders having a base at the grassroots and going for pliant persons who can be puppets and who are in power because of India’s support.

India often disappoints because it is unable to fulfill its promises. It is said that India promises and China delivers.

When India deals with Nepal it sometimes overlooks the protocol. For example, the 1950 Treaty was signed by the Prime Minister of Nepal but from India’s side, India’s Ambassador signed it.

Nepal does not like the intervention of India in their domestic affairs even in the constitution.

Nepal feels that India does not allow it to pursue independent foreign policy, especially concerning China

After the April earthquake because of the criticism from the international donors, the Nepalese produced the constitution in September 2015. It resulted in a political earthquake.

As a consequence, a new movement started by madhesis and janjatis. The Assembly has also been acting as the parliament.

India only held that it will take that Nepal has a constitution and not ‘the’ constitution. On the other hand, the international community has congratulated Nepal.

All Nepali elites joined hands in the creation of a constitution. It marginalized the Madhesis and Janjatis. Before the pronouncement of the constitution, India provided huge earthquake relief.

Prime Minister Narendra Modi has visited Nepal. He gave his opinion on the constitution while addressing the Nepal parliament. He said that the constitution should look like a bouquet of flowers.

Issues or conflicts in the India-Nepal Relations:

1950 Treaty: It reflects China’s expansionist design. According to Mao, the five Himalayan Kingdoms are the five fingers or the five digits of China i.e Bhutan, Sikkim, Nepal, Tibet, and Arunachal Pradesh.

National treatment of each other citizens, also in terms of employment including public sector employment

Nepal will give primacy to India in infrastructure development, hydropower, and business opportunities.

There will be freedom of movement.

The 1950 treaty has been a major bone of contention between India-Nepal Relations. There is no problem with the treaty. The problem is in the secret letters exchanged with the treaty.

Both countries shall not tolerate any act of aggression against each other. In such cases, they will go for effective consultation and will take all necessary steps.

Nepal shall not import arms from any other country without the permission of India. It can also do so only when India cannot fulfill Nepal’s requirements.

It goes against the sovereignty of Nepal. The Treaty was signed by Rana and thus lacks legitimacy.

Whatever benefits Nepal gets from India is like a drop in the ocean and on the other hand, India gets just proportionate benefits

What India should do?

India should ask Nepal to discontinue the Treaty.

Because the Treaty has lost relevance. Nepal has several times imported arms from China. Nepal has developed a closeness to China.

The treaty provides the basis to carry on the anti-India agenda and Blackmail India. Nepal will never revise the treaty or abrogate it.

Nepal cannot absorb such a huge number of Nepalese working in India.

Nepal imports electricity from India. It suffers from power cuts at least 16 hours per day minimum.

Nepal is reluctant to work with India on the production of electricity.

India plans large-scale dams and Nepal is in the earthquake zone.

India insists on a monopoly over power management.

India insists Nepal should give primacy to India whereas Nepal wants open tenders with other countries for a better price.

Under Narendra Modi’s government, India and Nepal entered into power-sharing arrangements which include joint investment, development, marketing, setting up of infrastructure, and transmission lines.

A triangular land on the tri-junction of India Nepal China. It comes on the route of Mansarovar.

Since 1962 India has had a military post. Nepal claims the territory under China’s pressure.

As per the Treaty of Sagauli 1816, the river Kali is a natural boundary. The land in the West is Indian territory and the East in Nepal.

To protect the interests of everyone who has been impacted on both sides of the border, Nepal and India should reopen the water dialogue and develop new policies.

Today, it is important to steer clear of territorial nationalism rhetoric. It has set the stage for a peaceful conversation in which both parties show compassion. They consider what is practical.

For the neighborhood’s first policy to take hold, India must be a considerate and giving partner.

In terms of interpersonal relationships, administrative cooperation, and political exchanges, India should be more proactive with Nepal.

India should be more proactive in its interactions with Nepal on the political, bureaucratic, and interpersonal levels.

In the meantime, India should steer Nepal toward more inclusive discourse in the spirit of friendship while continuing its policy of staying out of Nepal’s domestic affairs.