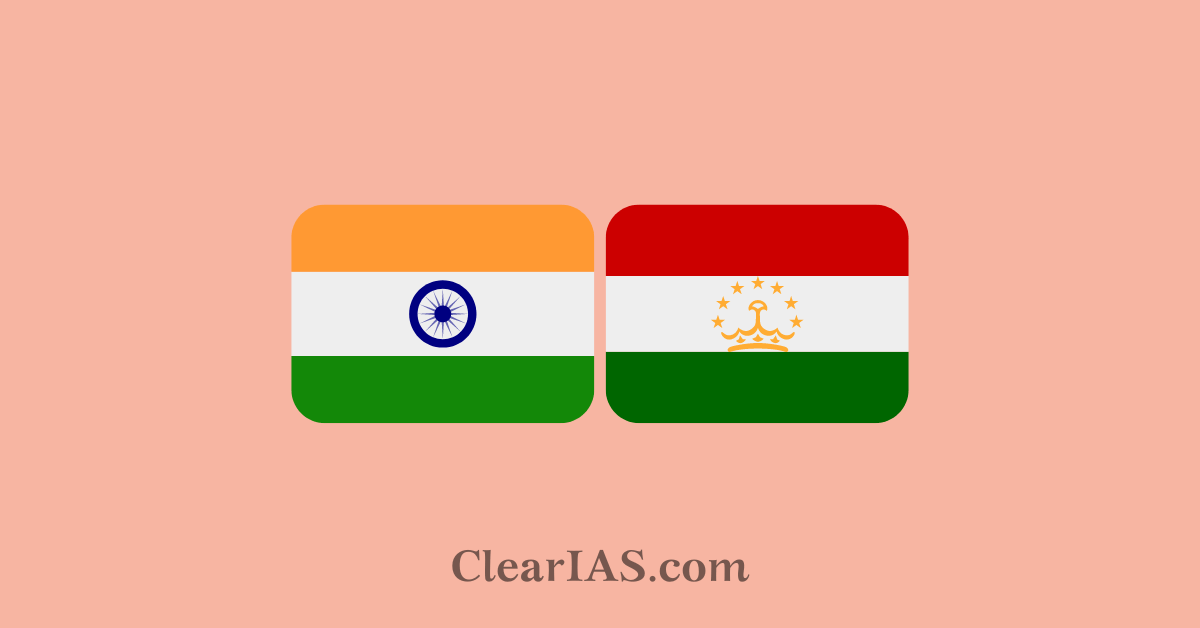 The bilateral relations between India-Tajikistan have been traditionally close. Read here to know more about it.

Since the establishment of diplomatic relations on 28 August 1992, regular high-level visits between the two countries have further cemented the bilateral ties.

Deep-rooted historical and cultural linkages have helped expand and widen the relationship to a new level.

Cooperation between the two countries encompasses all aspects of human endeavor with a special focus on military and defence ties.

In 2018, during a visit, the Indian President announced a grant of USD 20 million for Tajikistan for projects mutually agreed upon by the two sides. A total of 08 MoUs/agreements were signed in the following areas–

The two countries have five bilateral consultative mechanisms in the form of:

In general, Tajikistan supports India in most elections for UN bodies and other international organizations.

In 2020, Tajikistan extended support for India’s candidature for a non-permanent seat in UNSC for the term 2021-22. Tajikistan has publicly supported India’s bid for UNSC permanent membership.

Since Tajikistan’s independence in 1991, India has played the role of a development and aid partner for Tajikistan.

After the outbreak of Covid-19 in 2020, India provided humanitarian medical assistance to Tajikistan.

Since the establishment of the Indian embassy in Dushanbe in 1994, Tajikistan has been a beneficiary of the Indian Technical & Economic Cooperation Programme (ITEC).

Trade and Economy are the weakest links in India-Tajikistan’s relationship, which in turn is impacted by the lack of reliable land connectivity between the two countries.

The trade route through Iran and Turkmenistan is impacted from time to time due to US sanctions on Iran, and the ups and downs of bilateral relations between Turkmenistan and Tajikistan.

Indian exports to Tajikistan mainly consist of pharmaceuticals, medical preparations, cane or beet sugar, tea, handicraft, and machinery. Indian pharmaceutical products occupy approximately 25% of the Tajik market. However, not all medical products are directly imported from India and some of them arrive in Tajikistan via Russia.

India and Tajikistan share strong historical, cultural, and linguistic ties. There is a great liking for Indian culture and films and films and TV serials dubbed in the Russian language are routinely shown on local TV channels.

India’s military presence and activities have been significant, beginning with India’s extensive support to the anti-Taliban Afghan Northern Alliance (ANA). In 2002, India built a hospital at the Farkhor Air Base.

The Farkhor Air Base became fully operational in 2006, and 12 MiG-29 fighters and trainer aircraft are planned to be stationed there.

India is the fourth nation after the US, Russia, and Germany to have a military base in Central Asia.

India has also established a military hospital in southern Tajikistan with a capacity of 50 beds that will treat military personnel as well as civilian.