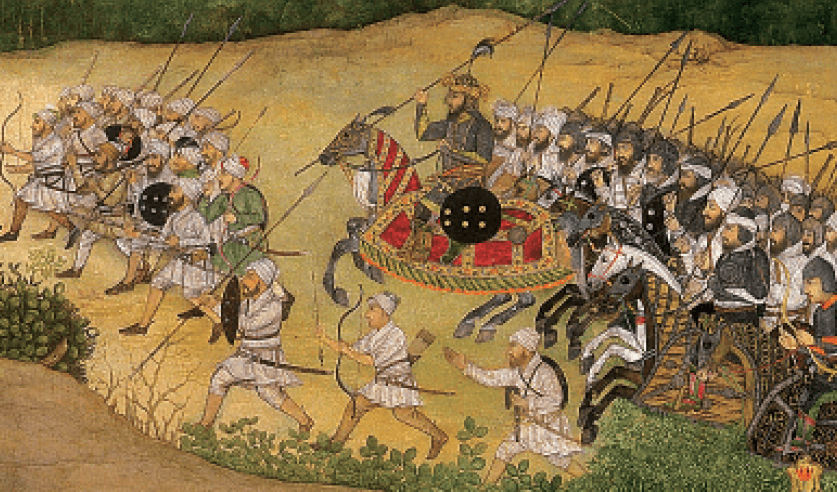 Mansabdari System was the bureaucratic administration system of the Mughal Rulers in India. What does the term ‘Mansab’ mean?

The bureaucratic administration of Mughals in India was based on a system called Mansabdari System.

Those nobles who joined Mughal service were enrolled as mansabdars.

For ease of learning, let’s start with a quick comparison – which will help you understand the concept.

You know about the Indian Administrative Service (IAS) officers in independent India. One of their postings is as collectors. They are in charge of revenue administration at the district level.

You can compare the collectors of the modern era with the Mansabdars of the Mughal era.

Both IAS officers and Mansabdars are government officials – part of the administrative (bureaucratic) framework.

However, the functions of Mansabdars not only include civil work but also military work.

The Mughals enrolled people of all races and religions into government jobs.

A person wishing to join the royal service had to petition through a noble, who presented a tajwiz to the emperor.

Tajwiz was a petition presented by a nobleman to the emperor, recommending that an applicant be recruited as mansabdar.

If the applicant was found suitable a mansab (rank) was granted to him.

Higher mansabs were given to princes and Rajput rulers who accepted the suzerainty of the emperor.

What does the term ‘Mansab’ denote?

The term ‘Mansab’ denotes the rank (position) of a Mughal military officer.

Higher the Mansab, higher the salary, status, and position of the officer.

Though in administrative records there were 66 grades of mansabdars, but in practice there were only around 33 mansabs.

Mansab: Understand the Zat and Sawar

Initially, a single number represented the rank, salary, and the size of the contingent of the mansabdar.

However later, the rank of mansabdar came to be denoted by two numbers – Zat and Sawar.

Sub-divisions of each Mansab (Rank)

The ‘Zat’ fixed the rank in the army. The salary of a Mansabdar was based on his Zat.

The ‘Sawar’ refered to cavalary men Mansabdar had to maintain. Mansabdar also had to keep horses ready.

Note: Even if the Sawar rank was higher, the mansabdar’s position in the official hierarchy would not be affected. It will be decided only by the Zat rank.

For example, a mansabdar with 5000 Zat and 2000 Sawar was higher in rank than a Mansabdar of 4000 Zat and 3000 Sawar.
However, there were exceptions to this rule particularly when the mansabdar was serving in a difficult terrain.

Salary of Mansabdars: In cash and land

The Mansabdars were paid according to their ranks. They were paid a good amount of money.

Those Mansabdars, who were paid in cash, were called Naqdi.

Those Mansabdars who were paid through land (Jagirs) were called Jagirdars.

It is to be remembered that it is not land that was assigned but only the right to collect revenue or income from the piece of land.

No mansabdar could hold on to the said Jagir for a long term as they were liable for transfer. Mansabdars were not supposed to accumulate their salaries and wealth. After the death of a mansabdar, all his jagirs and wealth was confiscated. As a result, Mansabders used to spend lavishly. In short, they had no option but to spoil their earning.

The Mansabdars’ (Jagirdar’s) lands were not hereditary!

The Mansab’s post or honour or dignity was not hereditary and it lapsed after the death or dismissal of the Mansabdar. Mansabdar’s property returned to the state after his demise.

Who introduced Mansabdari in India?

The Mansabdar appears to be a Central Asian institution. There is a view that this institution came to India with Babur. However, during Babur’s time, instead of the term of Mansabdar, the term Wajahdar was used.

It was under the regime of Akbar when Mansabdari system became the basis of military and civil administration.

Did Mansabdars reside in their Jagirs (land allotted to them)?

All mansabdars did not reside in their own jagirs but used servants to collect revenues there while they themselves served in another part of the empire.

Note: The Delhi Sultanate (The Khalji and the Tughlaq monarchs) too appointed military commanders as governers of territories. These land were called the Iqta and the landholders were called Iqtadars or the muqti. Most of the Muqti stayed in their Iqta unlike Jagirdars.

The number of Mansabdars during Mugal Rule

Akbar maintained 1,803 Mansabdars, by the end of the reign of Aurangzeb, their number rose to 14,499.

The increase of the number of Mansabdars during the reign of Aurangzeb led to the Jagirdari and agrarian crisis which led to the collapse of the Mansabdari system.

The fall of Manasabdari System

In Akbar’s reign, the system worked near perfect. The revenue collected by the Mansabdar from his jagirs (and transferred to the Emperor) was enough to pay his assigned salary as well.

These jagirs, in the initial days, were carefully assessed so that their revenues were roughly equal to the salary of the mansabdar.

However, in the later stage, there was a shortage of jagirs. Also the size of the jagirs started to shrink.

In the Aurengazeb era, the revenue collected by Mansabdars for the government was not enough to pay the salary assigned to them.

Mansab system was a grading system used by the Mughal rulers to fix the rank and salary of a Mansabdar, who were basically royal officers.

The mansabdars were nobles who acted as military commanders, high civil and military officers, and provincial governors.

The rank of a Mansabdar was determined by the number of horses and cavalrymen he maintained.