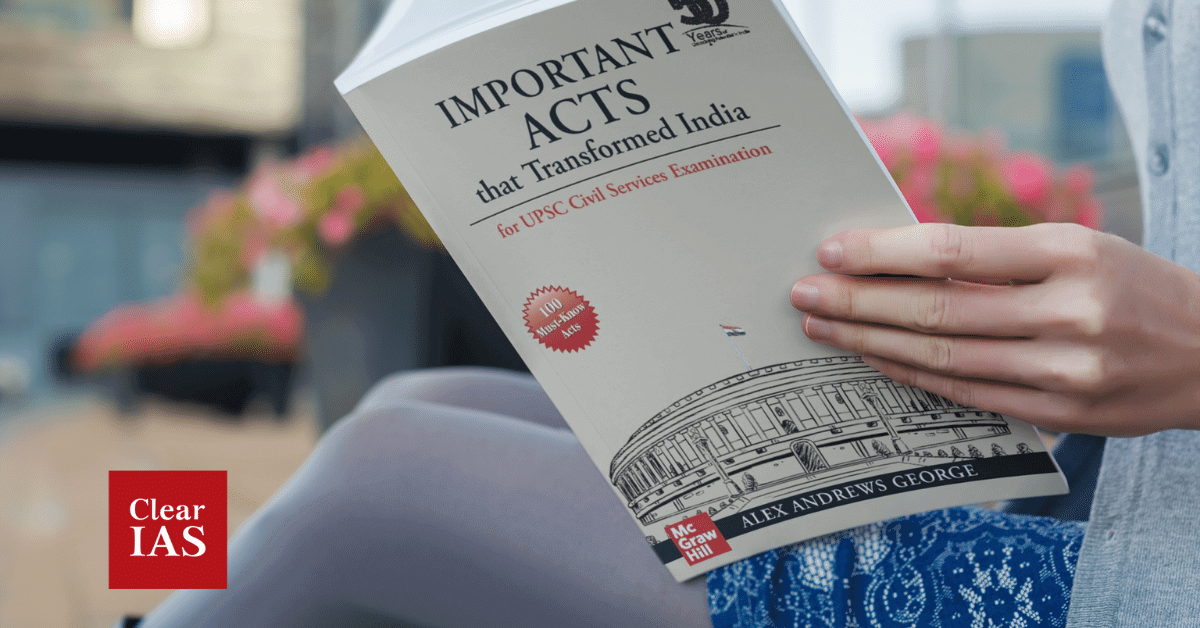 Questions worth 22 marks in UPSC Civil Services Exam (Prelims) 2019 were from a single topic – Important Acts enacted by Indian Parliament. There is no surprise in this because UPSC expects future Civil Servants to be knowledgeable about the important Acts/Bills/Rules etc.

Cut-off marks in UPSC Civil Services Preliminary Exam 2019 for general category was 98 marks out of 200.

Out of this, more than 1/5th of the marks could have been easily got, if aspirants knew the provisions of the important acts.

Questions in UPSC CSE Prelims 2019 from the topic ‘Important Acts’

Qn 1) Which of the following statements is/are correct regarding the Maternity Benefit (Amendment) Act, 2017?

Qn 2) In India, ‘extended producer responsibility’ was introduced as an important feature in which of the following?

Which of the statement given above is/are correct?

Which of the statements given above is/ are correct?

Qn 6) The Environment Protection Act, 1986 empowers the Government of India to
1. State the requirement of public participation in the process of environmental protection, and the procedure and manner in which it is sought
2. Lay down the standards for emission or discharge of environmental pollutants from various sources

Qn 7) As per the Solid Waste Management Rules, 2016 in India, which one of the following statements is correct?

(a) The waste generator has to segregate waste into five categories
(b) The Rules are applicable to notified urban local bodies notified towns and all industrial townships only.
(c) The Rules provide for exact elaborate criteria for the identification of sites for landfills and waste processing facilities.
(d) It is mandatory on the part of the waste generator that the waste generated in one district cannot be moved to another district.

Qn 9) Consider the following statements about ‘the Charter Act of 1813’:

ClearIAS releases a new book ‘Important Acts that Transformed India’ to save your time!

Even though most coaching institutes are still not aware, the requirements of the UPSC exam has undergone a lot of changes in recent years. Traditional methods of preparation are no longer sufficient to succeed in the ‘IAS Exam‘. The sources from which UPSC picks questions have also changed. The conventional textbooks are not enough to answer questions like the ones mentioned above.

This book is an all-in-one book which covers all important Acts, Rules, and Regulations relevant for UPSC Civil Services Examination (CSE) General Studies Papers – I, II, III, and IV.

Just go through the Table of Contents of Important Acts that Transformed India to understand the structured approach of the book.

The book uses a unique approach which divides 100 must-know Acts topic-wise – into 12 Parts correlating with the subjects in the latest UPSC CSE Syllabus. Each chapter (Act) is divided into – introduction, background, objective, main provisions, amendments, criticism, importance and impact.

In UPSC Civil Services Main Exam 2019, Questions worth 65 marks were directly asked from the topic ‘Important Acts that Transformed India‘. Indirect questions or applications were a lot more. Aspirants should note that questions from Acts are asked not just in General Studies Paper 2, but all 4 papers.

Analysis of previous year UPSC questions points out that, every year a lot of questions are directly and indirectly asked from the topic – Acts enacted by the Parliament.

In CSE 2019 (Prelims), 11 questions (worth 22 marks) asked by UPSC were directly related to specific laws.

UPSC not only asked about recent acts but also about those acts enacted years before. Further, the questions were not just about acts. The law-specific questions included bills, rules, and even regulations.

The same trend was seen in UPSC CSE Mains 2019 as well.

Aspirants preparing for UPSC CSE 2020 and UPSC CSE 2021 are recommended to make the most out of our latest book ‘Important Acts that Transformed India.

Considering this as an evergreen topic, the Return on Investment on the 100 Acts mentioned in the book will be really high in UPSC Civil Services Exam.

PS: You can now order ‘Important Acts’ book at a discounted price on Amazon. The books will be shipped as soon as possible so that aspirants preparing for UPSC CSE this year will not lose the opportunity!