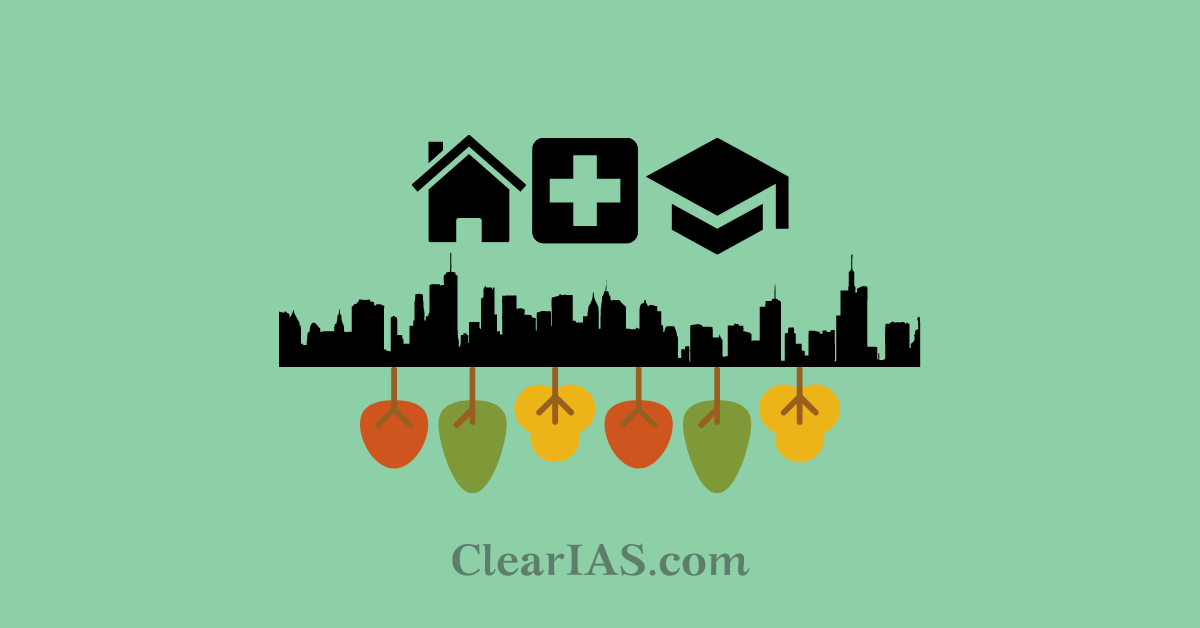 Urbanization is the norm of the modern era. Read here to know the causes, effects, and significance of it on the world.

Urbanization is the movement of people from rural to urban regions, expanding cities and towns. It is the process through which cities grow as higher percentages of the population come to live in the city.

Urbanization involves a complex set of economic, demographic, social, cultural, technological, and environmental processes that increase the proportion of the population of a territory that lives in towns and cities.

What leads to urbanization?

Industrialization: Industrialization has improved job prospects by allowing individuals to work in contemporary sectors in occupations that contribute to economic progress. Because of better job possibilities, more individuals have been drawn to relocate from rural to urban regions since the industrial revolution.

Commerce: Commercialization and commerce are associated with the belief that towns and cities provide better business possibilities and returns than rural regions.

Cities also emerge when rural regions gradually transition into urban landscapes. Such a transition may be a result of mineral discoveries, resource exploitation, or agricultural operations.

India along with China and Nigeria are the most rapidly urbanizing countries as they account for 35% of world urban population growth projected for the 2018-2050 period.

In 2018 a large number of India’s cities have a population of between 300,000 and 1 million inhabitants. There are 120 medium-sized cities of such population size and only five urban settlements with 20 million or more inhabitants.

In India, the urban population amounts to 461 million people. This number is growing by 2.3 per cent each year. By 2031, 75 per cent of India’s national income is estimated to come from cities.

Providing the necessary urban infrastructure is the big challenge as 70 to 80 per cent of the infrastructure that will be needed by 2050 has not been built yet, and the estimated investment gap amounts to approximately 827 billion US dollars.

Demographic processes of immigration and migration, as well as natural population growth, are important determinants of urbanization, but these are in turn underpinned by other processes, especially structural economic change.

Asia has about 50% level of urbanization in Asia and Africa remains mostly rural, with only 43% of its population living in urban areas.

Some of the beneficial effects of urbanization include job development, technical and infrastructure improvements, better transportation and communication, educational and medical facilities, and higher living standards.

Urbanization and economic growth are strongly related in terms of industrialization, employment generation, and increase in productivity.

Dwelling crisis: There is a continuous scarcity of housing as the number of people living in metropolitan areas grows.

Overcrowding: Overcrowding, urban congestion is a constant, and it is an element that is growing day by day as more people and immigrants migrate to cities and towns in quest of a better living.

Unemployment: Lack of highly skilled jobs is most prevalent in metropolitan areas, especially among educated individuals.

Slums: Industrialization is fast-paced but there is a shortage of developed land for housing. The increasing migration of rural immigrants to the city, and the inflated prices of land beyond the urban poor contribute to the rise of slums and squatters in metropolitan areas.

Health crisis: Communicable illnesses like typhoid, dysentery, plague, and diarrhoea eventually can spread rapidly. Covid 19 pandemic is a live example of how overpopulated cities and medical facilities collapse under the weight of a pandemic.

Pollution: The need for transportation increases with the increase in population, resulting in traffic congestion and pollution.

Urban Heat Islands (UHI): These are significantly warmer urban areas than their surrounding rural areas due to human activities. Urban Heat Island is a major problem associated with rapid urbanization.

Crime rates: Shortage of resources, overcrowding, higher poverty rates, unemployment, and a loss of social services and education lead to social issues such as violence, drug misuse, and crime.

The National Smart Cities Mission is an urban renewal mission launched in 2015, to promote cities to provide core infrastructure, a clean and sustainable environment, and a decent quality of life to their citizens through the application of ‘smart solutions’.

The purpose of AMRUT  which is mainly for urban rejuvenation is to:

It was launched in 2014 to accelerate the efforts to achieve universal sanitation coverage and to ensure that the open defecation free (ODF) behaviours are sustained, no one is left behind, and that solid and liquid waste management facilities are accessible, the Mission is moving towards the next Phase II of SBMG i.e ODF-Plus.

Swacch Bharat mission Urban 2.0 was allocated funds in Union Budget 2021. The goal of the Swachh Bharat Mission Urban 2.0 is to make all the cities garbage-free with sophisticated waste management systems.

National Heritage City Development and Augmentation Yojana (HRIDAY) was launched on 21 January 2015 to bring together urban planning, economic growth, and heritage conservation in an inclusive manner to preserve the heritage character of each Heritage City.

Atmanirbhar Bharat Abhiyan (Self-reliant India Mission) is a campaign launched by the Central Government of India which included an Rs.20 lakh crore economic stimulus package and several reform proposals. The five pillars of the mission are- economy, infrastructure, system, democracy, and demand.

Private investments: More investments can be encouraged for green living and other urban initiatives for sustainable landscapes.

Access for all: every resident should be able to access all the services, without discrimination of any kind. Disabled friendly and inclusive infrastructure should be made mandatory in urban areas.

Employment: To mitigate the negative consequences of increasing urbanization while still protecting natural ecosystems, private investments in environmental resource utilization and employment creation should be promoted.

Health and Population management: population control is important to manage the spread of diseases. It will help in creating a healthy society with medical facilities accessible to all.

Poverty alleviation: A bottom-up approach can be adopted to better understand unique challenges faced by the urban poor and worked upon.

As we move forward in the 21st century, the global population is likely to continue growing. Urban areas will continue to grow with the population. By 2050, it is projected that two-thirds of the urban population will be living in urban areas, that are close to 7 billion people in cities alone.

This continual growth presents complex challenges as we prepare for the cities of the future. How we choose to manage urbanization will have consequences for our world for many years to come.

The growth of cities as I.T. hubs has opened up new avenues of employment but has also created new problems. Substantiate this statement with examples. (15 marks, 250 words)