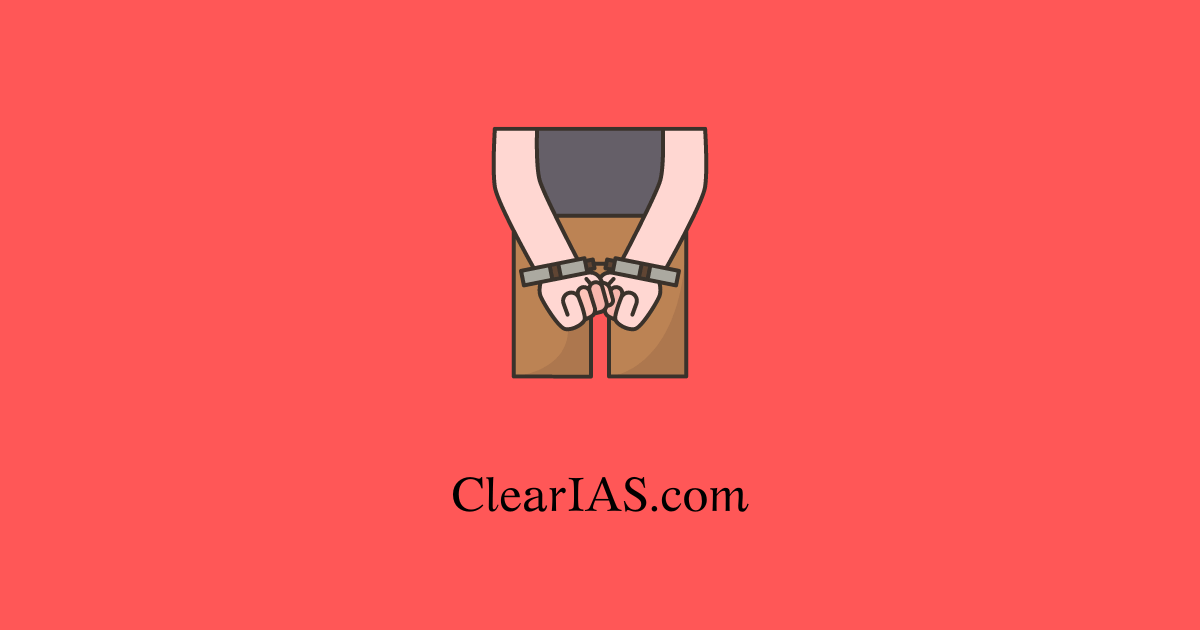 India has a grim record of police brutality and custodial violence. Between 2001 and 2018, 1727 persons died in police custody, however, only 26 policemen were convicted for such deaths.

According to the Law commission of India, the crime by a public servant against the arrested or the detained person who is in custody amounts to custodial violence.

Custodial deaths are common despite enormous money and time spent on training and sensitizing police personnel.

The recent issue of Tamil Nadu custodial deaths has yet again highlighted the methods used by the police during interrogation. The police when get frustrated sometimes resort to violence and torture while interrogating.

Article 20: Right to protection against the conviction of offenses.

Article 21: Right to life and liberty.

Article 22: Right to protection against arrest and detention in certain circumstances.

D K Basu vs State of West Bengal 1987: Under this case, the supreme court of India observed that the use of torture is not permissible and an offense against Article 21.The court observed that custodial death is a matter of concern and it is more aggravated as it is committed by the protector of the citizens.

Nilabati Behera vs the state of Odisha: According to this case the state could no longer escape liability in public law and the state is under compulsion to pay the compensation.

Rama Murthy vs the state of Karnataka: The supreme court while upholding the fundamental rights of the prisoners identified the problem of torture and ill-treatment in prisons as an area that needs reforms.

Custodial violence comes in a variety of forms, which are mentioned below

Physical Violence: by using physical force or smashing, which could leave one fatigued and afraid of dying

Psychological violence: not giving them accurate information and abusing their minds. Threats and shame are other methods for accomplishing this.

Sexual Violence: This may involve humiliating one’s dignity and verbal sexual assault. This might have a psychological effect on the victim for a very long time.

Reasons behind the custodial violence

Police use custodial violence to elicit confessions and secrets due to procedural pressures, as sometimes police face pressure to find the criminals to solve a case. There is a disproportionate ratio between crime rate and manpower.

There are many cases of judicial delays and such delays give more time to the police to interrogate and this sometimes leads to torture and assault. Frequently violent offenders get bail and escape the judicial process by taking advantage of the loopholes and thus police resort to such tactics.

There is a lack of proper training. Sometimes police personnel are low on human rights concepts and lack experience in scientific methods in crime investigation and interrogation of the accused involved.

The issue of custodial violence has been too politicized. And the political and bureaucratic influence and the increasing public pressure sometimes lead to police taking the help of assault.

Sometimes it can be a result of the increasing societal pressure and many times the police have to commit such violence to calm the public sentiments affected by the acts of the person in custody.

Such beatings and thrashing of the person in custody by the police can deter any potential criminal from refraining from crime and thus police resort to it to deter any future defenders.

The police sometimes also resort to violence as such activities lead to personal glorification and create appreciation and apprehension among the police officers.

Strong legislation is absent, India doesn’t have anti-torture legislation and is yet to criminalize custodial violence.

India is a signatory to international standards of human rights and it must also uphold those same principles in the domestic sphere. It also results in international fugitives as the absence of safeguards on custodial violence has been one of the reasons why extradition of offenders is difficult for India. For example, Vijay Mallaya.

It sometimes leads to psychological issues. Due to the intolerance by the police toward the psychological needs and issues of the person in custody, it might lead to sadism, sexual violence, social hatred, and many more.

The issue of custodial violence deprives a person of his most basic right, ie right to fair treatment by law. It tarnishes the old image as it makes the police someone to be feared rather than respected and as a result, people fear approaching them.

How to curb custodial violence

Given the problem of custodial deaths, technology has been proposed as a silver bullet by many.  For example, body cameras could hold officers liable, deception detection tests, automated external defibrillators, brain mapping, and so on.

There must be more efforts to create the inquiry and try to make it a little more humane by providing training to police personnel. The police officers and the stations have to be properly trained on the topic of accountable policing.

There has to be a mandatory session for the officers, especially those who are having a history of temper issues and violence and need to be put under the guidance of counseling and psychological evaluation.

Police need to have all the data and the documents of those who are in custody containing the medical conditions and also provide sufficient medical aid to those who need it to ensure proper sensitization.

India can ratify the already signed UN Convention on torture in line with the national standards. And the center can enact legislation to protect the rights of those who are in custody.

There is an urgent need for third-party inspections through unrestricted and regular access to independent and qualified persons to the places of detention for inspection for constant vigilance to keep the police personnel under check.

The above-mentioned reforms should be supplemented with strong ethical policing reforms. And the adoption of an effective mechanism system for police will help in reducing custodial violence in all its forms.

Technology can make policing more convenient but it can never be an alternative for compassionate policing established on trust between the police and the citizens. The need of the hour is that the government should ratify the United Nations Convention on Torture which was also recommended by the Law Commission of India in its report.