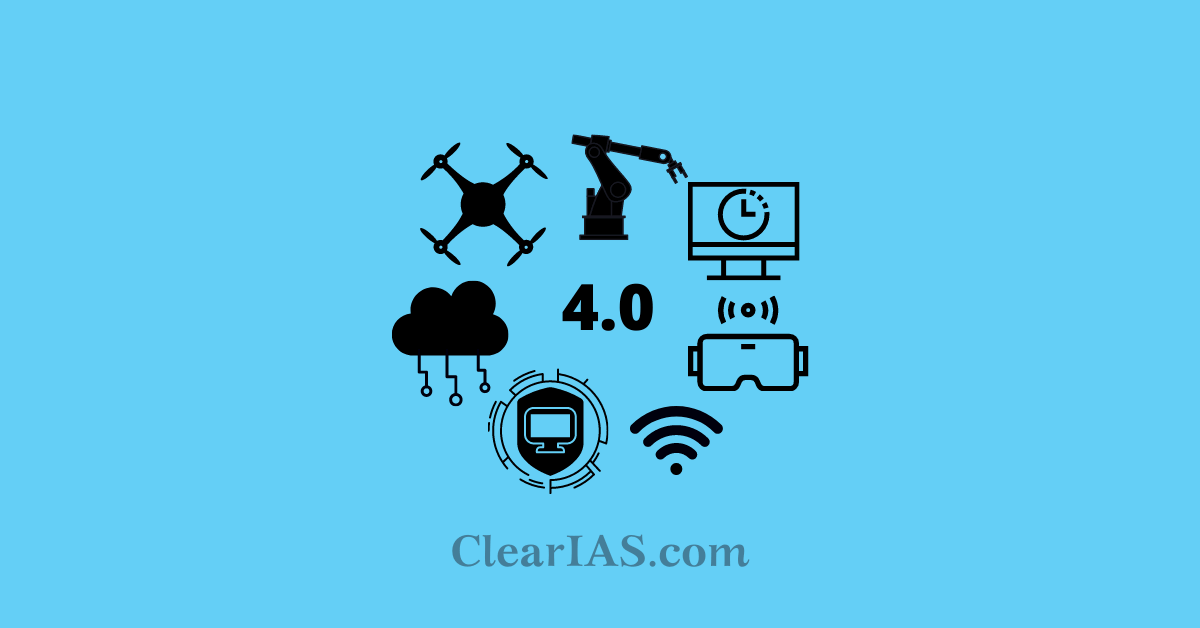 The fourth industrial revolution, 4IR or Industry 4.0 embodies the rapid change in technology, industry, and society in the 21st century. Read here to understand the significance of this revolution.

We are in the midst of a technological revolution that is fundamentally altering how we live, work and relate to the world.

This transformation is different in scale, scope, and complexity compared to history.

The response to such a revolution should be integrated and comprehensive, involving all stakeholders on the global level, from the public, private sectors to academia and civil society. 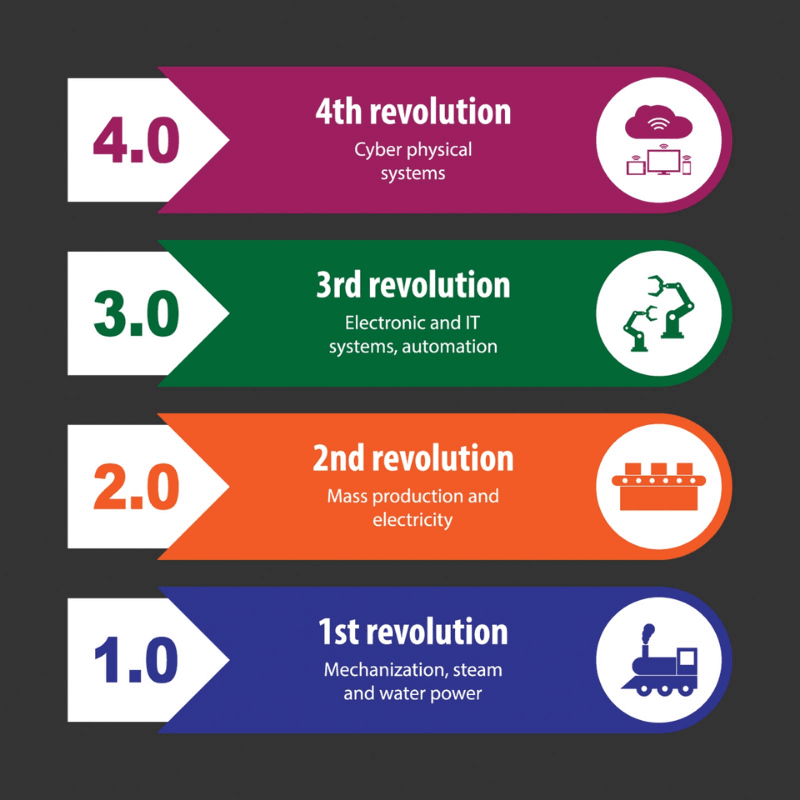 It used water and steam power to mechanize production. The implementation of new technologies took a long time, the period between 1760 and 1820, or 1840 in Europe and the United States. Textile manufacturing was the first to adopt such changes and saw profound consequences. Eventually, the iron industry, agriculture, and mining were taken over. It also had societal effects with an ever stronger middle class.

It used electric power to create mass production. This is also called the technological revolution and is the period between 1871 and 1914. It resulted from extensive railroad and telegraph networks, which allowed for faster transfer of people and ideas, along with electricity. Electrification allowed factories to develop the modern production line. It was a period of great economic growth, with an increase in productivity. But it also caused a surge in unemployment since many factory workers were replaced by machines.

used electronics and information technology to automate production. It is also called the digital revolution and occurred in the late 20th century after the end of two world wars. The slowdown of industrialization and technological advancement pushed for this revolution. The production of the Z1 computer (which used floating-point numbers and Boolean logic) was the beginning of digital development. The supercomputer was the next significant development in communication technologies. And with the extensive use of computer and communication technologies in the production process; machinery began to replace the need for human power.

The Fourth Industrial Revolution is a continuation of the Third, the digital revolution that has been occurring since the middle of the last century. It is characterized by a fusion of technologies that is blurring the lines between the physical, digital, and biological spheres.

This was coined by the World Economic Forum founder and Executive Chairman Klaus Schwab.

The Fourth Industrial Revolution is a fusion of technologies like artificial intelligence (AI), robotics, the Internet of Things (IoT), 3D printing, genetic engineering, quantum computing, and other technologies. It’s the collective force behind many products and services that are fast becoming indispensable to modern life. These are rapidly changing the way humans create, exchange, and distribute value.

Technologies of the fourth industrial revolution

A better way to understand the Fourth Industrial Revolution is to focus on the technologies driving it:

AI defines computers that can think like humans. They can recognize complex patterns, process information, draw conclusions, and make recommendations. AI has many applications, from spotting patterns in huge piles of unstructured data to powering the autocorrect on your phone, to the smallest chip to a big manufacturing process.

Blockchain is a secure, decentralized, and transparent way of recording and sharing data, with no need to depend on third-party intermediaries. The digital currency Bitcoin is the best-known blockchain application. However, the technology has other applications like traceable supply chains, securing sensitive medical data anonymously, and combating voter fraud.

New computational technologies are making computers smarter as they enable computers to process vast amounts of data faster than ever before. The advent of the cloud has allowed businesses to safely store and access their information from anywhere with internet access. Quantum computing technologies will eventually make computers millions of times more powerful. These computers will have the potential to enhance AI, create highly complex data models in seconds, and speed up the discovery of new materials.

Virtual Reality (VR) offers immersive digital experiences (using a VR headset) that simulate the real world, while augmented reality (AR) merges the digital and physical worlds. Examples include makeup apps, which allow users to digitally experiment with makeup products before buying them, and the Google Translate phone app, which allows users to scan and instantly translate street signs, menus, and other text.

Biotechnology utilizes cellular and biomolecular processes to develop new technologies and products for developing new pharmaceuticals and materials, efficient industrial manufacturing processes, cleaner, more efficient energy sources, etc. Another example is our ability to edit the blocks of life has recently has been massively expanded by low-cost gene sequencing and techniques such as CRISPR.

It refers to the design, manufacture, and use of robots for personal and commercial use. While the use of robot assistants in every home is still to be a reality, technological advances have made robots increasingly complex and sophisticated. They are used in fields as wide-ranging as manufacturing, health and safety, and human assistance.

The Internet of Things

The IoT describes everyday items from medical wearables that monitor users’ physical condition to cars and tracking devices inserted into parcels connected to the internet and identifiable by other devices. Businesses can collect customer data from constantly connected products, allowing them to better gauge how customers use products and tailor marketing campaigns accordingly. There are also many industrial applications, such as farmers putting IoT sensors into fields to monitor soil attributes and inform decisions such as when to fertilize.

3D printing allows manufacturing businesses to print their parts, with less tooling, at a lower cost, and faster than via traditional processes. Designs can be customized to ensure a perfect fit.

Impact of the fourth industrial revolution

In the future, technological innovation will lead to a supply-side improvement, with gains in efficiency and productivity. Transportation and communication costs will drop, logistics and global supply chains will become more effective, and the cost of trade will diminish, all of which will open new markets and drive economic growth.

There are four main effects that the Fourth Industrial Revolution has on business: on customer expectations, on product enhancement, on collaborative innovation, and organizational forms.

India and the industrial revolution

The third Industrial Revolution started in India in the 1980s. The increase in the application of personal computers, the internet, and ICT marks the transformation of this phase.

In India, the Industrial Revolution 4.0 is based on Big Data and Artificial Intelligence. The fourth revolution is expected to affect the Indian sectors inside out from villages to big industries.

Like the previous revolutions, the Fourth Industrial Revolution has the potential to raise global income levels and improve the quality of life for populations around the world. But it has its fair share of concerns and negatives too.

The revolution could yield greater inequality, particularly in its potential to disrupt labour markets.

Technology is one of the main reasons why incomes have stagnated, or decreased.

On the other hand, it is also possible that the displacement of workers by technology will, in the aggregate, result in a net increase in safe and rewarding jobs.

The pervasiveness of digital technologies and the dynamics of information sharing typified by social media are also causing concern and discontent among the public.

Current systems of public policy and decision-making evolved alongside the Second Industrial Revolution.  But the rapid changes of the fourth revolution demands broader regulations with the inclusiveness of customers, developers, and the public at large.

The fourth industrial revolution will also affect national and international security. The relationship between warfare and technological innovation is well established.

Ultimately, the ability of government systems and public authorities to adapt will determine the impact on public life.

If they prove capable of embracing a world of disruptive change, subjecting their structures to the levels of transparency and efficiency that will enable them to maintain their competitive edge, they will endure. If they cannot evolve, they will face increasing trouble.

The advances in technology have the potential to reduce the scale or impact of violence, through the development of new modes of protection, for example, or greater precision in targeting.

Each one of us is responsible for guiding the evolution of this technological revolution. It depends on the decisions we make daily as citizens, consumers, and investors. We should take the opportunity and power we have to shape the Fourth Industrial Revolution and direct it toward a future that reflects our common objectives and values.

To achieve this we must develop a comprehensive and globally shared view of how technology is affecting our lives and reshaping our economic, social, cultural, and human environments.

“In the end, it all comes down to people and values. We need to shape a future that works for all of us by putting people first and empowering them. In its most pessimistic, dehumanized form, the Fourth Industrial Revolution may indeed have the potential to “robotize” humanity and thus deprive us of our hearts and soul. But as a complement to the best parts of human nature—creativity, empathy, stewardship—it can also lift humanity into a new collective and moral consciousness based on a shared sense of destiny. It is incumbent on us all to make sure the latter prevails.” – Klaus Schwab, Founder and Executive Chairman of the World Economic Forum.