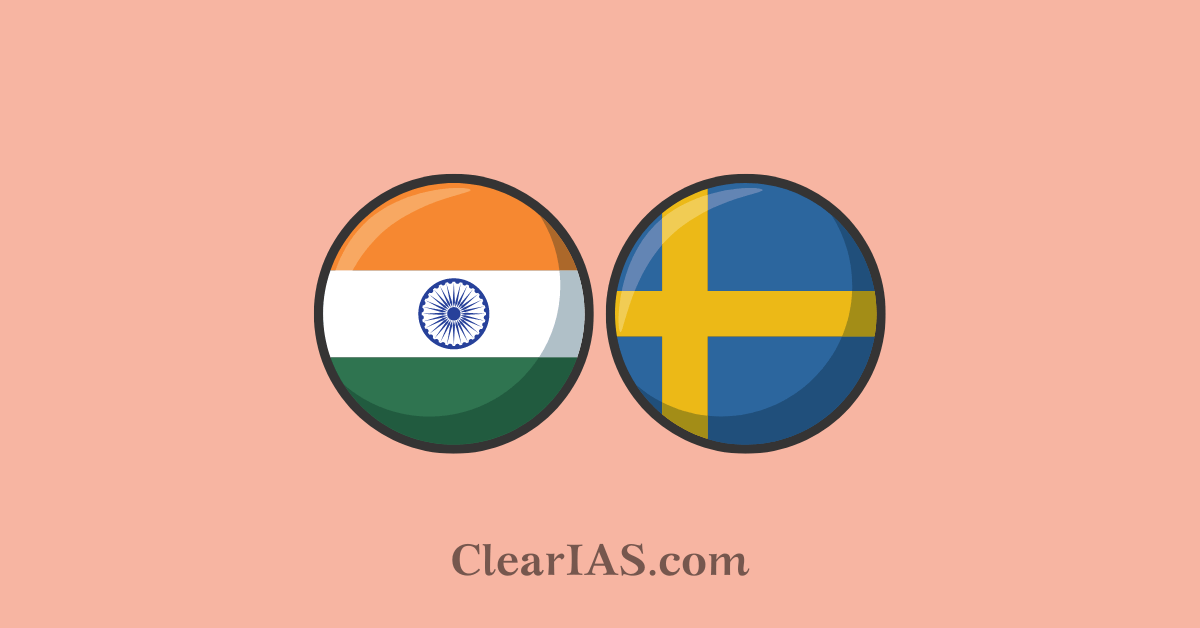 India-Sweden has close relations based on similar approaches to global challenges, peace, and security. Read here to know more.

India and Sweden have had longstanding close relations based on common values; strong business, investment, and R&D linkages; and similar approaches to meet global challenges of peace & security, and development.

Sweden(the largest Nordic country in terms of landmass, population, and GDP) is a member of the EU and Schengen visa regime but not the Eurozone. Sweden is not a member of NATO.

The ties between India and Sweden were established in 1949, based on the strong foundation of shared democratic values. High-level contacts between the two countries go back to 1957 when Prime Minister Jawaharlal Nehru visited Sweden.

Sweden recognized India as an independent nation in 1947, with both countries establishing formal diplomatic relations two years later. India set up a diplomatic mission in Stockholm in 1949.

At the first-ever UN Conference on Human Environment that was hosted by Sweden in Stockholm in 1972, the Indian delegation was led by PM Indira Gandhi. Sweden also co-hosted the Stockholm+50 with Kenya in June 2022.

In the 1980s India and Sweden worked together on nuclear disarmament issues within the framework of the ‘Six Nation Peace Summit’ (which also included Argentina, Greece, Mexico, and Tanzania).

At the UN General Assembly, India and Sweden present an annual Joint Statement on Humanitarian Affairs.

In 2013 during the Swedish Presidency, India joined the Arctic Council as an Observer at the Kiruna Ministerial Meeting.

Both countries have, in the past, joined hands on common causes such as decolonization, anti-apartheid promoting development partnerships, environment, UN Peacekeeping, UN Peacebuilding, and disarmament.

The partnership has witnessed a sharp upswing in high-level engagement since 2014.

Sweden hosted the First ever India Nordic Summit in Stockholm in April 2018 where Prime Minister Modi and his counterparts from all five Nordic countries participated.

During the 2018 visit of Prime Minister Modi to Sweden, the two sides adopted a wide-ranging Joint Action Plan and signed a Joint Innovation Partnership.

Innovation, Technology, Investment, and R&D collaborations provide the bedrock of this modern relationship.

Sweden is an externally oriented economy with a focus on services and industry sectors, especially on manufacturing, IT, life sciences, circular economy, and clean technologies.

Sweden consistently ranks among the top two economies in the world in terms of Innovation.

After China and Japan, India is Sweden’s third-largest trade partner in Asia.

Many Swedish companies such as Ericsson, Swedish Match (WIMCO), SKF, and ASEA (later to become ABB) came to India even before it became independent Since then numerous other Swedish companies like Atlas Copco, Sandvik, Alfa Laval, Volvo, Astra Zeneca, SAAB, etc., have invested in India.

In 1913 Rabindranath Tagore became the first non-European to be awarded the Nobel Prize (for Literature).

In the mid-1950s, a small bronze statuette of Buddha seated on a lotus was discovered during an excavation conducted in an old Viking settlement on the island of Helgö on Lake Mällaren, west of Stockholm. The statuette, popularly known as ‘Helgö Buddha’ is dated around 1,400 years ago and is thought to be from Kashmir. In 2015 the Swedish Post issued a special stamp on Helgö Buddha.

Indian classical arts, especially music and dance, are widely appreciated in Sweden. Yoga (and also Ayurveda) are popular among the Swedes. A day-long Ayurveda Seminar was organized in Feb 2022 where around 70 Ayurveda practitioners from Sweden joined.

The 19th session of the Indo-Swedish Joint Commission for Economic, Industrial and Scientific Corporation (JCEC) was held in Sweden in October 2019.

India and Sweden jointly launched the Leadership Group on Industry Transition (LeadIT) in association with World Economic Forum (WEF) at the UN Climate Action Summit convened by the UN Secretary-General in September 2019 in New York.

The Stockholm Environment Institute is the Secretariat for the Lead IT whose membership has since expanded to 35 members including 16 countries (including France, Germany, RoK, UK, and the USA) and 19 big companies (including Dalmia Cement, Mahindra Group, and Spice Jet).

In 2009, the two countries signed a Memorandum of Understanding (MoU) for Defence Cooperation. The Joint Working group established under it meets regularly.

The General Security Agreement signed in 2019 on the exchange and mutual protection of classified information enables a comprehensive partnership.

Sweden and India are also working together on India’s Venus orbiter mission, Shukrayaan. In November 2020, the Swedish Institute of Space Physics (IRF) announced this as its second collaborative project with ISRO.

The Bofors scandal of 1987 damaged bilateral relations when Swedish and Indian journalists exposed that Swedish armaments manufacturer Bofors used corruption to secure the sale of howitzers and related supplies to India.

The strategic importance of the India-Sweden relationship is being reflected at the regional and global levels. Sweden is important for India’s engagement with the Nordic counties and EU as well.

India-Sweden should expand defence and security partnership along with boosting cooperation on climate change, high-tech, and innovation partnership, research and development, healthcare innovation, trade and investment, leadership skill, and industry transition. In each of these focus areas, India and Sweden have rich and diverse proficiency based on resource endowment, mobilization, and capacity enhancement implying shared politico-socio-economic and technological progress.

As India and Sweden traditionally share similar perspectives for sustainable development, the present relationship in the wake of the COVID-19 global pandemic is the moment for making collaborative intervention in preventing global warming, establishing harmony with nature, and saving planet Earth while complying with the goals and commitments made as signatories of the Paris Agreement 2015.