ClearIAS » Geography Notes » Divisions of Indo Gangetic Plains: All You Need To Know 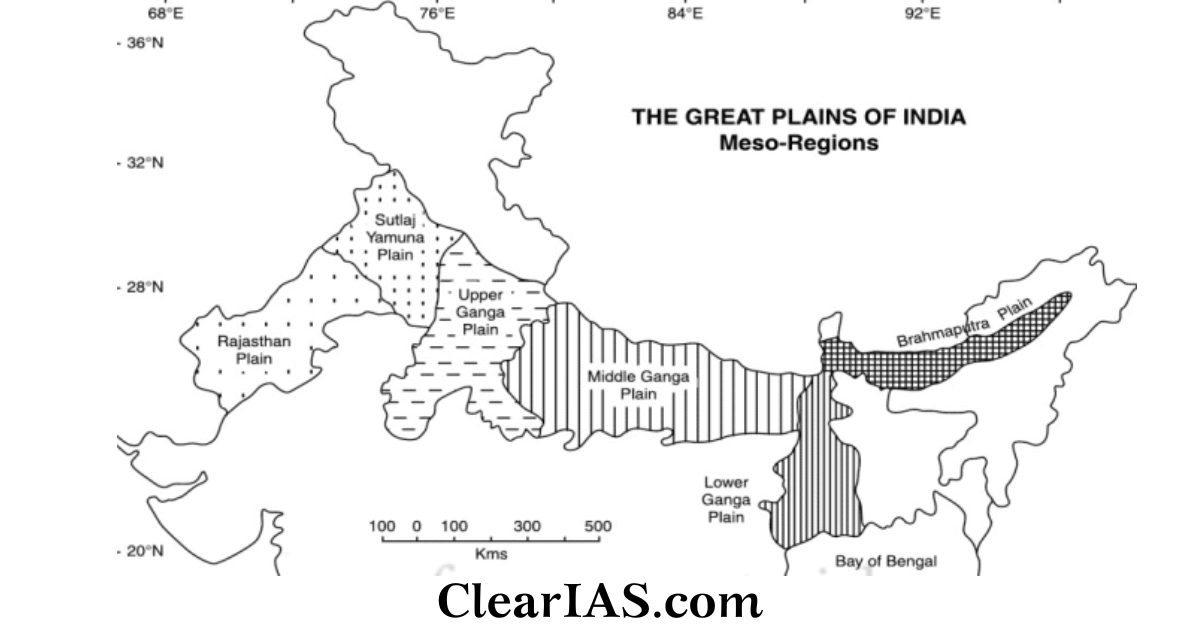 The wide geographical region known as the Great Plains of India includes the lush fertile plains between the Indus and Ganges rivers. They are also called the Indo-Gangetic plains.

It contains one of the Indian territory’s most fertile landmasses. There are many divisions of the great plains.

It is formed primarily from Bhangar Plains.

Dhors are long, narrow depressions that still exist where past rivers once ran. Alkaline lakes can be found on several dhors.

Occupied by Thar or the Great Indian Desert. A few gneisses, schist, and granite outcrops show that it is a portion of the Peninsular Plateau. It merely appears to be an aggradational plain on the surface.

This plain has a wavy surface. It supports agriculture in some areas of fertile tracts and is drained by several short seasonal streams coming from the Aravali.

An essential seasonal stream, Luni, empties into Rann of Kuchchh. Thali, or the sandy plain, refers to the region to the north of the Luni.

The Marwar plain is primarily made up of the desert area known as Marusthali. The Marusthali’s western portion is covered by sand dunes that are constantly moving.

The sole tree in this entire Marushatli region, which gets 25 cm of rain annually, is Khejri (the Bishnoi tribe is associated with it).

Dhrian, a desert with ephemeral dunes, may be found in Marusthali.

The semi-arid fertile plains or green patches of Rajasthan Bagar are known as ROHI.

Rajasthan Bagar, a semiarid plain, is located in the eastern Thar Desert up to the Aravali Range.

The land between two rivers, or “doabs,” makes up the majority of the plain.

These doabs have been linked by the depositional process along the rivers, giving them a uniform appearance.

Punjab refers to the Jhelum, Chenab, Ravi, Sutlej, and Beas rivers as “The Land of Five Waters.” However, they have poor drainage and are prone to flooding. The eastern boundary of the Punjab Haryana plain is defined by the subsurface Delhi-Aravali ridge.

Numerous streams known as Chos have severely degraded this plain’s northern portion. The result has been significant gullying.

The Ghaggar River, which is thought to be the modern successor to the Saraswati River, is the sole river that runs between the Yamuna and the Sutlej.

The world’s largest delta is located here. In the delta region, the Ganga river splits into multiple waterways. Estuaries, mud flats, mangrove swamps, sandbanks, islands, and forelands are abundant on the seaward face of the delta.

Tidal woods cover a substantial portion of the coastal delta. Due to the Sundri tree’s dominance in this area, these are known as the Sunderbans.

This region contains extensive areas of marshland. Terai or semi-terai conditions have developed as a result of the creation of alluvial fans by the coarse alluvial debris.

It is an aggradational plain that was created by the Brahmaputra and its tributaries depositing sediment.

Numerous alluvial fans are created by the numerous Brahmaputra river tributaries that originate in the north. As a result, the tributaries split into numerous channels, causing the river to meander and eventually creating the bill and oxbow lakes.

To create this vast plain, the Ganga and its numerous Himalayan-originating tributaries transported huge amounts of alluvium from the mountains and dumped it here.

The entire plain generally slopes to the east and southeast. Lower sections of the Ganges River flow slowly, and as a result, the region is distinguished by local prominences such as levees, bluffs, oxbow lakes, marshes, ravines, etc.

This plain was also formed as a result of peninsular rivers like the Chambal, Betwa, Ken, Son, and others joining the Ganga river system.

The majority of the rivers continually change their paths, rendering this region susceptible to periodic floods. In this regard, the Kosi River has been known as the “Sorrow of Bihar” for a long time.

With the exception of the Thar Desert, the entire plain has a dense network of roads and trains.

It has sparked extensive urbanization and industrialization.

It also holds significance for Cultural tourism as there are many religious places along the banks of the sacred rivers like the Ganga and the Yamuna which are very dear to Hindus.

The religions of Buddha and Mahavira as well as the Bhakti and Sufi movements all thrived in this region.