ClearIAS » Economics Notes » Economic Survey 2019-2020 Summary: 10 Key points which you should not miss! Finance Minister Nirmala Sitharaman tabled Economic Survey 2019-2020 in both the houses of Parliament.

Economic Survey (ES) is the flagship annual document of the Ministry of Finance which gives a detailed account of the various sectors of the economy.

The survey not only provides information about the overall economic scenario of the country in the past years but also an outline for the year ahead.

Economic Survey has increasingly become a forum for analysis and research on the economy. It is also a source of policy ideas. Here are 10 key points from the survey which you should not miss.

1. The question asked by Economic Survey 2020: “What causes wealth and prosperity of nations?”

The Economic Survey 2019-20 attempts to craft a framework of policies that can foster wealth creation in India.

This inquiry is particularly critical at this stage as India aspires to become a $5 trillion economy by 2025. The survey starts by quoting Adam Smith, who wrote “An Inquiry into the Nature and Causes of the Wealth of Nations” in 1776.

2. The theme of Economic Survey 2020: Enable markets, promote ‘pro-business’ policies and strengthen ‘trust’ in the economy

The theme of Economic Survey 2020 is “Enable markets, promote ‘pro-business’ policies and strengthen ‘trust’ in the economy”.

Interestingly, former Prime Minister Dr. Manmohan Singh has spoken in this direction. He had pointed out a few months back that the loss of trust is the main reason for the current economic slow down in India. It’s a good sign that the ES2020 is paving way for policies addressing this concern.

Note: The theme of last year’s Economic Survey (ES 2018-2019) was to enable shifting gears to accelerate and sustain a real GDP growth rate of 8% and thereby achieve the vision of a $5 trillion Indian economy.

3. Only when wealth is created wealth will be distributed

Economic Survey2020 quotes Hon’ble Prime Minister’s Independence Day Speech on 15th August 2019, when he highlighted that only when
wealth is created will wealth be distributed.

4. Suspicion towards India’s wealth-creators is ill-advised

ES2020 says that the feeling of suspicion and disrespect towards India’s wealth-creators is ill-advised.

EcoSurvey 2019-20 attempts to put to rest any scepticism about the benefits accruing from a market economy, both in economic thinking and policy-making.

Economic Survey 2019-2020 is bold and open in stating that ethical wealth creation is a noble human pursuit.

6. The ideas of wealth creation are rooted in India’s old tradition

The Survey documents that ideas of wealth creation are rooted in India’s old and rich tradition ranging from Kautilya’s Arthashastra to Thiruvalluvar’s Thirukural. ES survey finds that India has been the dominant economic power globally for more than three-fourths of known economic history. Survey points out that India has the design in it to be wealthy.

7. The invisible hand of the market supported by the hand of trust

Economic Survey – throughout most chapters – hints about the power of the invisible hand of the market. It argues for eliminating policies that undermine markets through government intervention.

The survey also speaks volumes about the need to build trust by ending static-crony capitalism. It mentions the need to shift from “Pro-crony” to “pro-business”, particularly promoting entrepreneurship at grass-root level.

8. Trust is a public good

Economic Survey Introduces the idea of “trust as a public good that gets enhanced with greater use”. The Survey also makes some suggestions for enhancing this public good.

9. Indian GDP estimates can be trusted

When many are now sceptical about the authenticity and accuracy of the GDP figures released by the Government of India, the Survey says that GDP estimates can be trusted.

10. Use of principles of behavioural economics as instruments of economic policy

This year’s ES like last year ES, use principles of behavioural economics as instruments of economic policy. This is used as an easy prism to have insights about human behaviour.

In this context, the Economic Survey 2019-20 presents “Thalinomics”- an attempt to relate economics to the common person using something that he or she encounters every day – a plate of food i.e. a Thali. What makes the Economic Survey 2020 special? 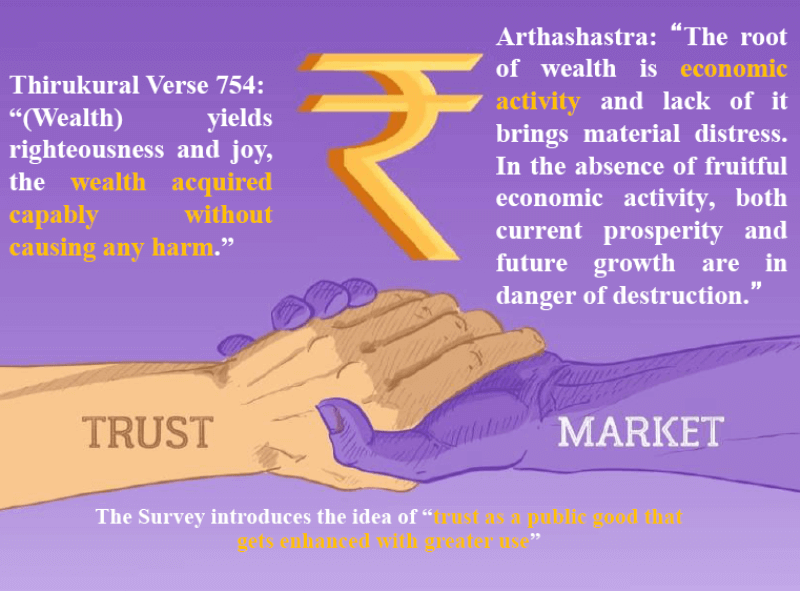 Krishnamurthy V. Subramanian, the Chief Economic Adviser of Ministry of Finance has done a commendable job in producing a thought-provoking masterpiece on ‘ethical wealth creation‘, particularly at this crucial time when India is facing a major economic slowdown.

Economic Survey 2019-20 believes that India has unprecedented opportunity to chart a China-like labour-intensive, export trajectory. The survey emphasizes on creating jobs and growth by specialization in network products.

The survey moves forward ideas like integrating “Assemble in India” into “Make In India” to focus on labour-intensive exports and thereby create jobs at large scale. It also discusses on efficiently scaling up the banking sector to be proportionate to the size of the Indian economy. Meanwhile, it also advises tracking the health of the shadow banking sector.

The survey had called for more reforms for making it easier to do business in the country. It advises the use of privatisation to foster efficiency.

The survey said for India to achieve a five trillion US dollar economy depends on promoting pro-business policies, strengthening the invisible hand of the market and ease of doing business.

The Economic Survey 2019-20 has given the emphasis on entrepreneurship and wealth creation at the grassroots. This message is reflected in Budget 2020 as well.