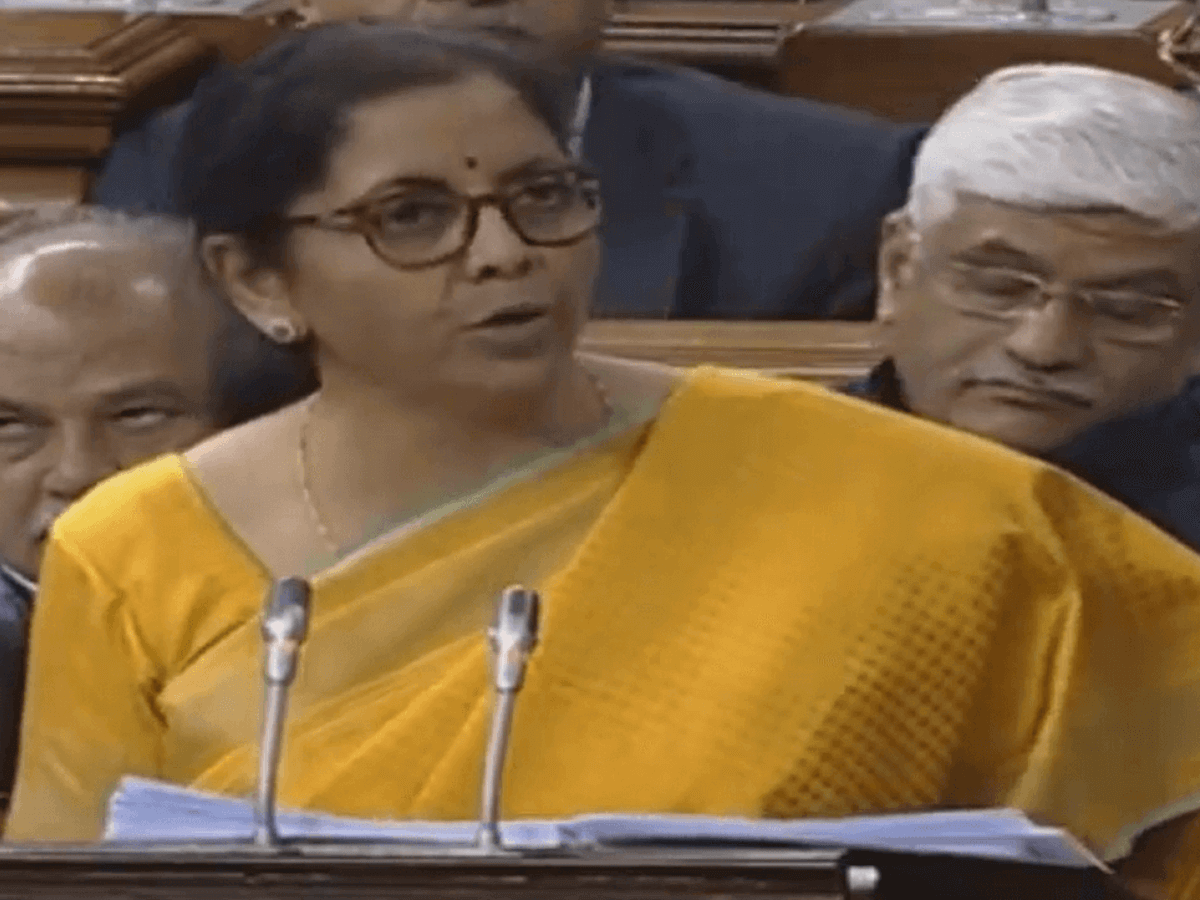 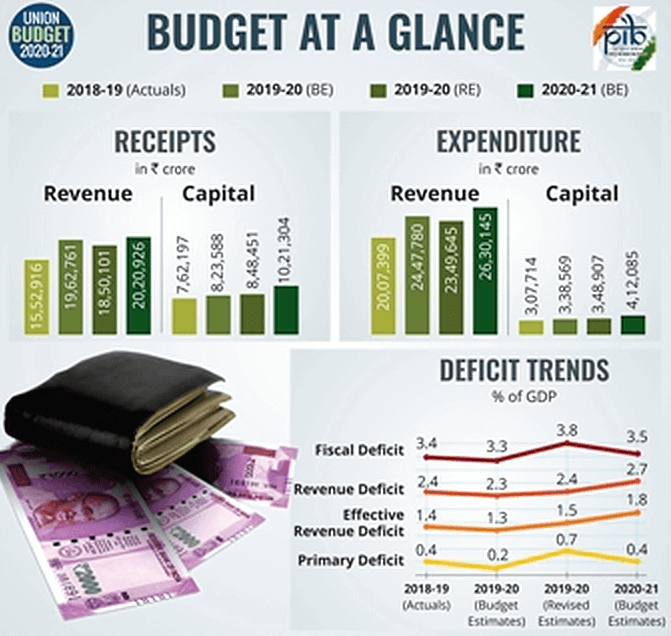 The total revenue expected in the financial year 2020-21(without considering borrowing) is only Rs. 22.45 lakh crores. As you can see the expenditure (Rs.30.42 lakh crores) is way higher than the receipts (Rs.22.45 lakh crores).

To balance the expenditure and receipts side of the budget, the government needs to borrow money.

The borrowings and other liabilities: Rs. 7,96,337 crores The Indian government needs to borrow Rs. 7.96 lakh crore in the financial year 2020-21 to meet its expenditure. Borrowings and other liabilities are known as Fiscal Deficit.

Do you need a formula for Fiscal Deficit? Here it is:

Ideally, Fiscal Deficit should be kept below 3% of GDP. The current rate is above the Financial Responsibility and Budget Management Act (FRBM) guidelines. I shall discuss in detail about FRBM in another post.

However, you should note that borrowing is not always a bad idea – if the borrowed money is used for productive purposes. For example, if the borrowed money is used to build capital assets like factories, roads, railways etc – that is productive. We have already seen the National Infrastructure Pipeline. Investments like those in NIP would result in better employment opportunities as well.

However, how does the Indian Finance Minister plan to utilise the borrowings as per Indian Budget 2020?

The Indian government had already taken many loans – mainly from the public. The interest payments for the same is above Rs. 7.08 lakh crore. You may note that this is just for interest payments and not for principal repayments.

So how much amount is left for productive investments?

This figure is known as Primary Deficit.

The Primary Deficit of India, as per the latest budget is Rs. 88134 crores.

This comes only as 0.4 of GDP. What should you understand from this figure?

The value of primary deficit denotes the borrowing which is not used for interest payments. Out of the borrowed money, only 0.4% of GDP is, in reality, available for productive purposes.

This government has set an ambitious target of sales of shares of Public Limited Companies – of the value of around Rs.2.1 lakh crores. This includes a probable shocker – to sell shares of Life Insurance Corporation of India (LIC). Previous governments haven’t touched this insurance cash cow, probably reserving it only for emergency situations.

Smt. Nirmala Sitharaman, under the usual disinvestment route, it is targeting Rs.1,20,000 crore. Finance Ministry is also aiming for another Rs. 90,000 crore via the disinvestment of Government stake in Public Sector Banks and Financial Institutions (read the IPO of LIC).

Note: For 2019-20, the target of the government during the budget proposal was Rs.105000 crore. However, it is updated in the revised estimates as Rs.65,000 crore. Even this figure is far from reality, as only Rs. 18,100 crore has been earned through this route in the first 9 months of this financial year. 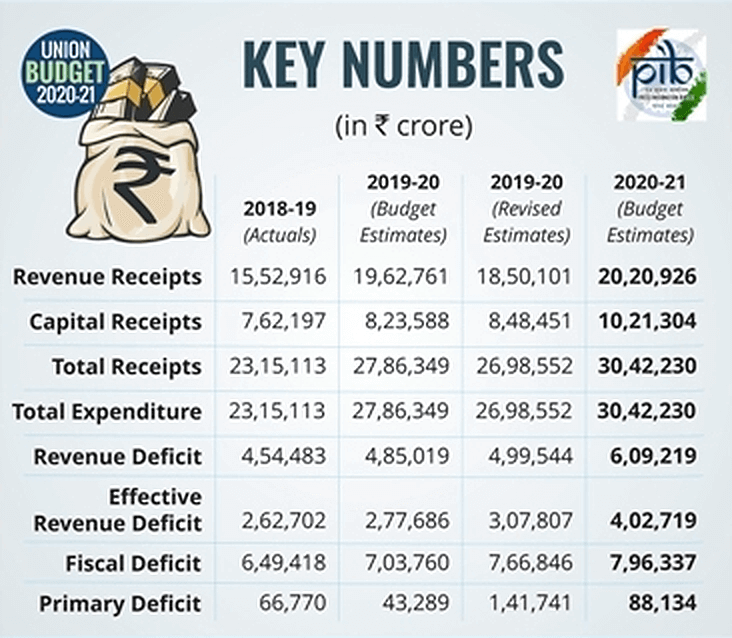 As we mentioned before, for a country to grow, it should invest in productive assets (capital assets). With that perspective in mind, the main figure to look at is capital expenditure. Only this figure would be used to build infrastructure – road, railways etc – which would help in future growth.

The Finance minister estimates a tax revenue of Rs.16.35 lakh crore for the financial year 2020-21. It should be noted that this is a lower figure than the last year budget estimates (Rs.16,49,582 crore) which will miss the target by about Rs.1.4 lakh crores as per revised estimates.

Apart from the tax revenue of Rs.16.35 lakh crore, the government also expect to get Rs.3.85 lakh crore as non-tax revenue. This is significantly higher expectations than last year budget.

Spending on the revenue side would not build any new assets. Revenue expenditure is used for day-to-day expenses of running the government machinery like salary, pension, interest payments etc.

Ideally, a government system should be efficient enough to generate surplus income from the resources on which it gives a salary, pension etc so that the additional revenue can be used for capital expenditure. However, in the case of India, the government machinery is not generating enough income to even to meet their salary or pension.

To understand the case better, consider a government project to collect a particular tax. If the salaries, pension, and administrative expenses of the project is Rs.26 crore, and if the project is able to collect only Rs.20 crore as tax, running this project results in a loss of Rs.6 crore rupees. In this case, it’s even better not to collect tax!

That is the reason why, the FRBM act, even in 2003, mandated to eliminate the revenue deficit completely. However, the fundamental problem of revenue deficit still exists in the Indian Budget.

Budget 2020: How the government is planning to finance the fiscal deficit? There are a few sources to finance the fiscal deficit, the most important one – we have already discussed – is market borrowings.

Higher the fiscal deficit, the higher will be the market borrowings. However, this will result in lower funds for the private sector to borrow.

Apart from market borrowings, other debt receipts like Securities against Small Savings, Other Receipts (Internal Debts and Public Account), Draw Down of Cash Balance etc. are also proposed to be widely used this time.

It is yet to be seen if India can grow at that pace in 2020-21 if inflation factor remains at the current level.

Note: There are two personal inferences here. At least one of those should be correct. (1) The growth in GDP is not entirely getting transformed into tax-revenue growth. Tax revenue growth should only be assumed to be 1/3rth of nominal GDP growth. (2) Considering that tax-data as verifiable at ground-level, the nominal GDP growth rate estimates may not be accurate. Income Tax is still expected to generate 17% of total receipts. A greater share (18%) is expected from Corporation Tax. Another 18% of receipts is estimated from the major indirect tax – Goods and Service Tax (GST). However, the major share of receipts in Budget 2020 comes from borrowings and other liabilities (20%).

Important announcements in the Union Budget 2020-21 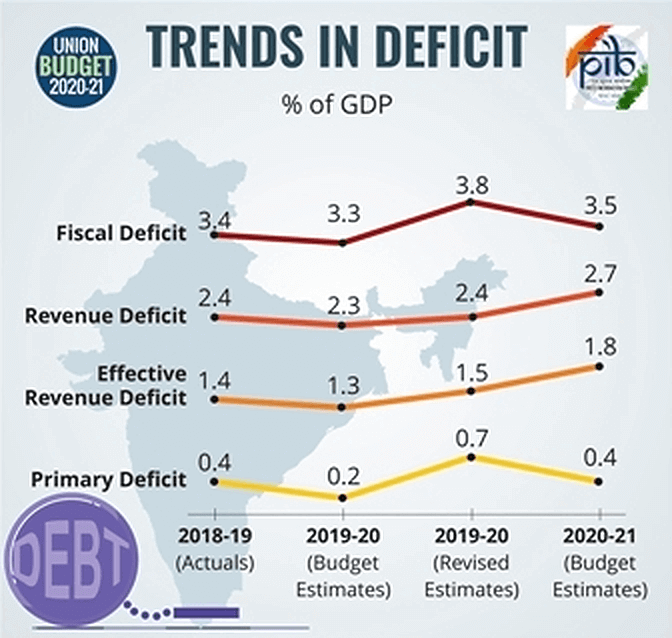 One important clue from this year budget is the falling tax revenue. Even the government has lowered its expectations on tax-revenue when compared to last year. Tax-revenue along with non-tax revenue is only helping to meet 2/3rd of the expenditure.

As the economy is facing a slowdown, the government cannot expect much from the income tax. GST still has many bottlenecks to be fixed. To fill the gap, the government is depending heavily on disinvestments and market borrowings.

To get out of the current economic slowdown, increase in fiscal spending in the priority areas is the right solution. Nevertheless, it is clear that, too much borrowing will widen the Fiscal Deficit. It is also against FRBM guidelines, but the government is now going in that direction.

Another indicator against the FRBM is the Revenue Deficit which increased to 2.7% of GDP (the actual target being 0% of GDP). Instead of increasing spending at the capital assets side, there is an increase in expenditure on the revenue side this year – which will surely create problems in future.

All the government should do now is to promote a good business atmosphere in India so that the tax revenue will increase accordingly. Otherwise, revised budget estimates will show the targets as missed. If that is the case, there won’t be enough funds for development projects and promises will remain only on paper.

Last but not least, overdependence on borrowings and disinvestment is not a sign of a healthy economy. Enlarging deficits just shows that things are not well. Probably these measures can be used a temporary medicine until the economy bounces back. However, we cannot do it year after year.

To conclude, while the vision of the budget is good, the logic of the division of funds under various heads could have been better.