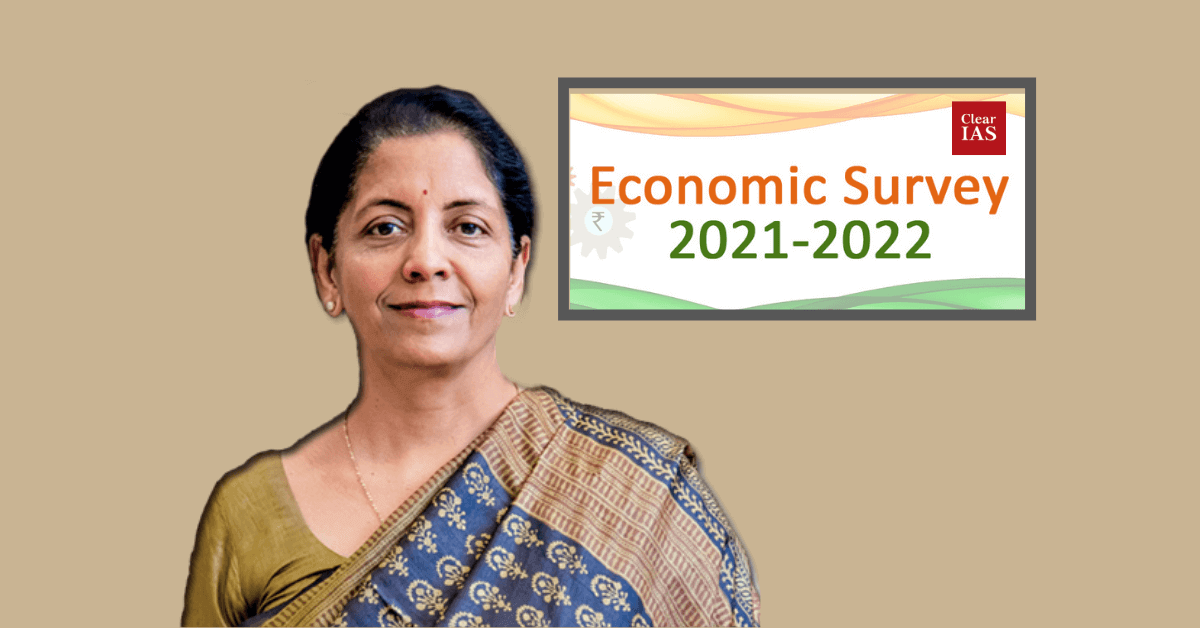 Economic Survey is the flagship annual document of the Ministry of finance – released usually a day before the Budget for the next year is presented in the Indian Parliament.

Economic Survey gives a detailed account of the various sectors of the economy and overall economic scenario of the country in the past years and provides an outline for the year ahead.

The Economic Survey, even though a government document, provides an opportunity for the Chief Economic Adviser to provide a disinterested, economic objective analysis.

The central theme of this year’s Economic Survey is the “Agile approach”, implemented through India’s economic response to the COVID-19 Pandemic shock.

Another theme highlighted in this Economic Survey relates to the art and science of policy-making under conditions of extreme uncertainty.

What is the Agile approach mentioned in the Economic Survey 2021?

As per the Agile approach, short-term policy responses can be tailored to an evolving situation rather than what a model may have predicted.

The “Agile approach” is based on feedback loops, real-time monitoring of actual outcomes, flexible responses, safety-net buffers and so on.

Planning is not done in the Agile approach as a deterministic prediction of the flow of events. Still, planning is relevant in the framework – mostly for scenario analysis, identifying vulnerable sections, and understanding policy options.

Economic Survey 2021-22 reverts to a single volume plus a separate volume for the Statistical Appendix.

The highlights of the Economic Survey are as follows:

State of the Economy

India has the tenth largest forest area in the world.

In 2020, the forests covered 24% of India’s total geographical, accounting for 2% of the world’s total forest area.

In August 2021, the Plastic Waste Management Amendment Rules, 2021, was notified which is aimed at phasing out single-use plastic by 2022.

The Compliance status of Grossly Polluting Industries (GPIs) located in the Ganga main stem and its tributaries improved from 39% in 2017 to 81% in 2020.

The Prime Minister, as a part of the national statement delivered at the 26th Conference of Parties (COP 26) in Glasgow in November 2021, announced ambitious targets to be achieved by 2030 to enable further reduction in emissions.

The need to start the one-word movement ‘LIFE’ (Lifestyle for Environment) urging mindful and deliberate utilization instead of mindless and destructive consumption was underlined.

Net receipts from crop production have increased by 22.6% in the latest Situation Assessment Survey (SAS) compared to the SAS Report of 2014.

Allied sectors including animal husbandry, dairying and fisheries are steadily emerging to be high growth sectors and major drivers of overall growth in the agriculture sector.

The Livestock sector has grown at a CAGR of 8.15% over the last five years ending 2019-20. It has been a stable source of income across groups of agricultural households accounting for about 15% of their average monthly income.

India runs one of the largest food management programmes in the world.

The government has further extended the coverage of food security networks through schemes like PM Gareeb Kalyan Yojana (PMGKY).

Rs. 89,066 crores raised via 75 Initial Public Offering (IPO) issues in April-November 2021 is much higher than in any year in the last decade.

Note: You can download the Economic Survey 2021-22 PDF here.