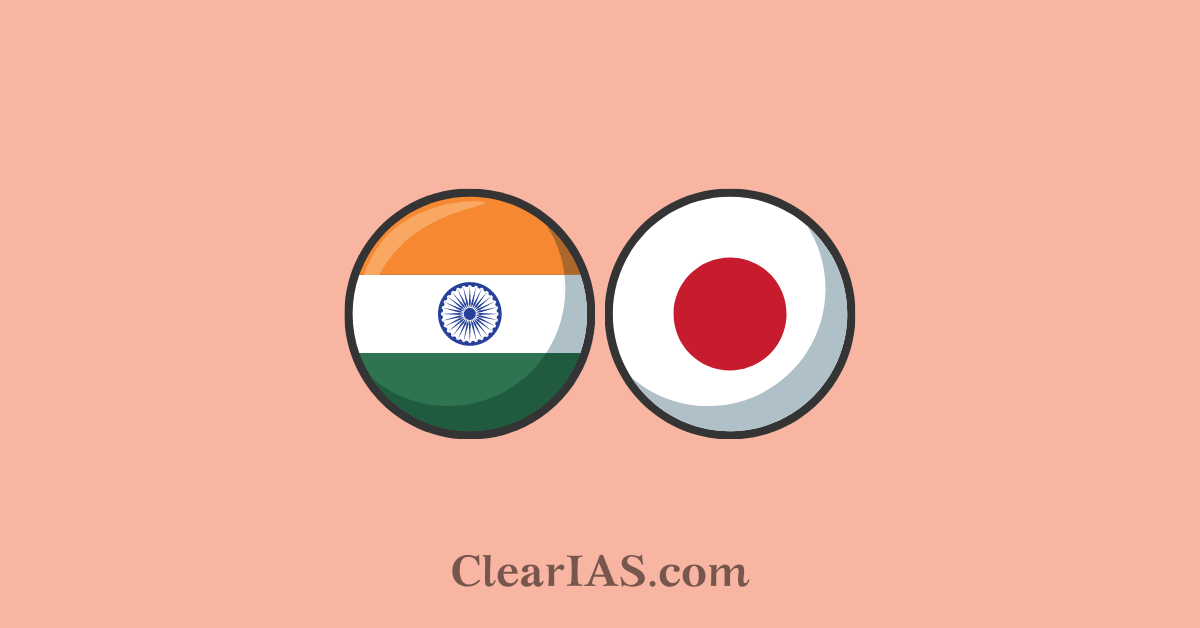 India-Japan has shared a cordial and crucial relationship over the years. Read here to know the past, present, and future of the bilateral ties.

The Japanese Prime Minister was on an official visit to India for the 14th India-Japan Annual Summit between the two countries.

The friendship between India and Japan has a long history rooted in spiritual affinity and strong cultural and civilization ties dating back to the visit of Indian monk Bodhisena in 752 AD. The exchange between Japan and India is said to have begun in the 6th century when Buddhism was introduced to Japan. Indian culture, filtered through Buddhism, has had a great impact on Japanese culture, and this is the source of the Japanese people’s sense of closeness to India.

Post Second World War, India did not attend the San Francisco Conference but decided to conclude a separate peace treaty with Japan in 1952 after its sovereignty was fully restored marking a defining moment in the bilateral relations and setting the tone for the future.

The prime ministers, as well as a royal couple of japan, have visited India and over the years the global and strategic partnership has strengthened.

Other MEA led-bilateral dialogues: The Act East Forum, established in 2017, aims to provide a platform for India-Japan collaboration under the rubric of India’s “Act East Policy” and Japan’s “Free and Open Indo-Pacific Vision”.

India-Japan exchanges have strengthened due to growing convergence on strategic matters; and its significance is growing from the common outlook on issues of peace, security, and stability of the Indo-Pacific Region.

The Tri-Service Exchanges between Japan and India have been institutionalized completing the triad. Coast Guards have had regular annual exchanges since 2006.

Malabar 2019 was conducted off Western Kyushu in the Sea of Japan in September 2019. INS Sahyadri and INS Kiltan participated in the exercise

Japan is regarded as a key partner in India’s economic transformation. In the recent past, the India-Japan relationship has transformed into a partnership of great substance and purpose.

Japan’s interest in India is increasing due to a variety of reasons including India’s large and growing market and its resources, especially the human resources. Japan’s bilateral trade with India reached US$ 17.63 billion in FY 2018-19.

India-Japan Digital Partnership (I-JDP) was launched during the visit of PM Modi to Japan in October 2018 furthering existing areas of cooperation as well as new initiatives within the scope of cooperation in S&T/ICT, focusing more on “Digital ICT Technologies”.

Reaffirming the Special Strategic and Global Partnership between India and Japan, the Prime Ministers concurred that the shared values and principles enunciated in the India-Japan Vision Statement issued in 2018 are particularly relevant in the present context, where global cooperation is required more than ever to address challenges that have become more acute.

Partnership for a free and open Indo-Pacific underpinned by Inclusiveness and Rules-based order:

Continuing bilateral and multilateral exercises including “Dharma Guardian” and “Malabar” respectively, while welcoming the participation of Japan for the first time in exercise MILAN, as well as making efforts to increase their complexity in the future.

Both countries affirmed the importance of bilateral and plurilateral partnerships among like-minded countries of the region, including the quadrilateral cooperation among Australia, India, Japan, and the United States (QUAD).

Relations with other countries:

Afghanistan: Both countries agreed to collaborate closely to realize peace and stability in Afghanistan, and stressed the importance of addressing humanitarian crisis, promoting human rights, and ensuring the establishment of a truly representative and inclusive political system.

Myanmar: Support for ASEAN efforts to seek a solution in Myanmar, and welcomed Cambodia’s active engagement as ASEAN chair to break the deadlock. They called on Myanmar to urgently implement ASEAN’s Five-Point Consensus.

Ukraine: The contemporary global order has been built on the UN Charter, international law, and respect for sovereignty and territorial integrity of states. They underscored the importance of the safety and security of nuclear facilities in Ukraine and acknowledged the active efforts of the IAEA towards it.

Sustainable Growth in a post-COVID World:

Supply Chain Resilience Initiative (SCRI): Launched by India, Japan, and Australia to counter China’s dominance of the supply chain in the Indo-Pacific region.

Acquisition and Cross-Servicing Agreement (ACSA): India-Japan logistics agreement signed in 2020 for armed forces of both countries to coordinate closely in services and supplies.

Special Strategic and Global Partnership: Upgradation of India-Japan relation in 2014.

India and Japan are common members of G 20, G 4, and the International Thermonuclear Experimental Reactor (ITER).

Japan and India cultivate and maintain relationships with other countries to support their position in the global community. In today’s perilous world, the two countries are bound to one another by common interests, especially where foreign policy is concerned.

India and Japan have a lot of mutual interests in the fields of digital technology- Japan has the tech and India has the labor with raw materials.

The close cooperation is advantageous for both the countries to tackle hostile neighbors like China as well.