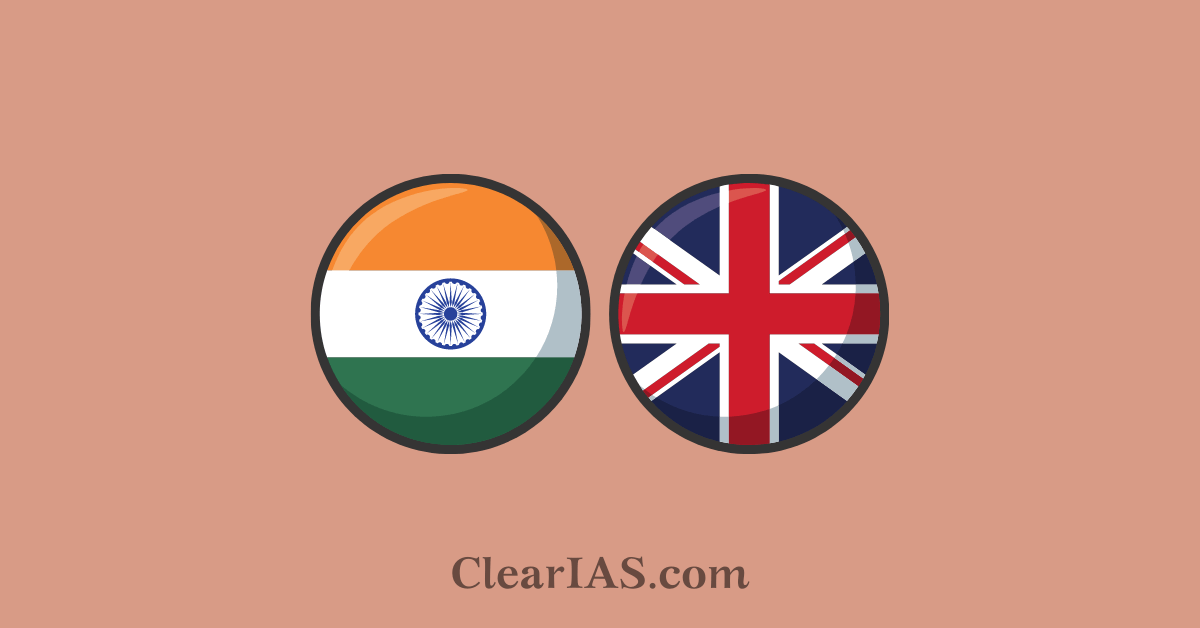 The India-United Kingdom has a long history of relationship; with the recent visit of the UK Prime minister, the relationship is being strengthened further. Read here to know more.

Recently, the prime minister of the united kingdom, Boris Johnson visited India, and defence and security initiatives were signed.

India and UK are bound by strong ties of history and culture. Here is a summary of the relations before independence.

1600: Trade was first established between Mughal India and Tudor England. Elizabeth I granted a royal charter to the East India company.

1707: During the rule of Aurangzeb, EIC became more powerful in manufacturing taking India’s then share in global GDP to 25%.

1757: The Battle of Plassey started the advent of company rule in India. Over the years a series of wars and treaties expanded the company’s influence all over India.

Through the Anglo-Mysore wars, anglo-Maratha wars, and Anglo-Sikh wars- EIC controlled most of the Indian subcontinent.

1857: Indian rebellion of 1857 led to the end of company rule in India. The rule was transferred to the crown and the British government.

1858: The British Government seized control of the territories and treaty arrangements of the former East India Company.

1876: Queen Victoria was declared the Empress of India and ruled over today’s modern India, Pakistan, and Bangladesh.

All the years, the British drained and spilled India’s vast wealth while her people suffered.

The 1857 rebellion became the inspiration for initiating the struggle for independence in India.

Many nationalists and revolutionaries and leaders stood up against the British rule like Tilak, Lala Lajpat Rai, Bhagat Singh, Netaji Subhash Chandra Bose, Mahatma Gandhi, Nehru, and many more.

The events of the freedom movement eventually led to the dissolution of the British Raj and the Independence of India on 15 August 1947.

1950: India decided to be in the commonwealth of nations after becoming a republic.

Both Britain and India have since pursued quite divergent diplomatic paths.

In particular, India became a major force within the Non-Aligned Movement, which initially sought to avoid taking sides during the Cold War. This contrasted with Britain’s position as a founding member of NATO and a key ally of the United States.

2004: The India-united kingdom partnership was upgraded to a strategic one. India’s multifaceted bilateral relationship with the UK intensified with its up-gradation to a Strategic Partnership.

2010: The relations were elevated to ‘Enhanced Partnership for the Future.

The UK supports India’s proposal for permanent membership of the UNSC and is also an important interlocutor for India in the EU, G8, G20, and global contexts.

2021: The prime ministers of both countries agreed to a new and transformational India-UK comprehensive strategic partnership. The ambitious India-UK roadmap 2030 was also adopted.

The India-UK roadmap is based on five pillars-

India is the 2nd largest investor in the UK. While the UK ranks 18th as a trading partner of India, it is 3rd as an investor in India.

India’s main exports to the UK are:

The main imports from the UK to India are:

In the services sector, the UK is the largest market in Europe for Indian IT services.

The top sectors attracting FDI from the UK are petroleum, ports, services, roads and highways, and computer software.

The growth of India’s multinational companies contributed greatly to UK’s business and economy.

India-UK bilateral merchandise trade (Trade in Goods and Trade in Service) has increased exponentially over the decade.

Under the Road map, a free trade agreement was signed in 2021.

India and UK signed a Memorandum of Understanding on Cultural Cooperation in July 2010. The Nehru Centre (TNC), established in 1992 in London, is the cultural outreach of the High Commission of India in the UK.

In 2015, the UK and Indian Prime Ministers signed a Nuclear Collaboration Agreement as part of a comprehensive package of collaboration on energy and climate change, including joint research programs and initiatives to share technical, scientific, financial, and policy expertise.

India is the second-largest source of students studying in the UK and the number of Indian students in the UK is approximately 38,000. The UK-India Education and Research Initiative (UKIERI) was launched in 2005 with a focus on higher education and research, schools, and professional and technical skills.

2016 was announced as the UK-India year of Education, Research and Innovation.

Prime Ministers Modi and Johnson have set out a shared vision for the UK-India defence partnership and agreed to advance the relationship to a new level.

As a Global Force for Good in health, the UK and India will use our combined research and innovation strength to address the biggest global health challenges, save lives and improve health and well-being.

The 2030 vision is a step in the right direction for re-energized trade, investment, and technological collaboration that improves the lives and livelihoods of the citizens; enhanced defense and security cooperation; and India-UK leadership in climate.

The India-United Kingdom are dynamic democracies and the world’s leading economies with impressive advancements in human resources, manufacturing, innovation, research, education, space, defence, green technologies, and clean energy, among other areas. This relationship can b utilized for the betterment of the fields and more collaborations should be undertaken.

The historical baggage also needs to addressed cooperatively to diminish the possibility of hindrance in future cooperations.