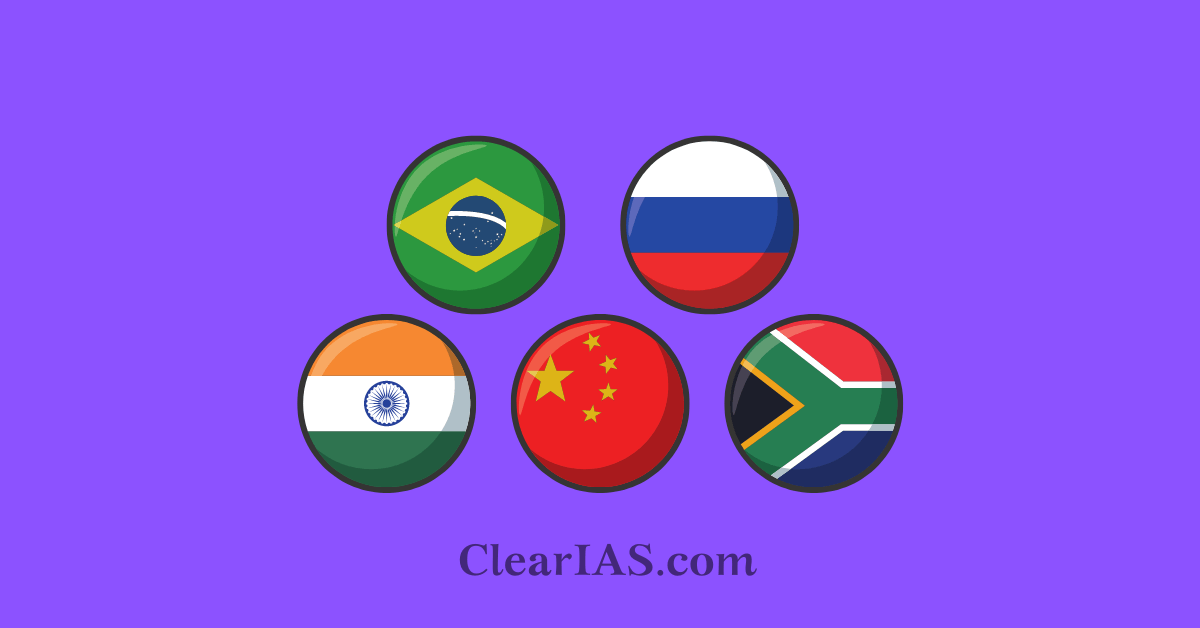 BRICS is an important grouping of countries influencing the global economy. Read here to know more about the grouping and its significance.

BRICS (Brazil, Russia, India, China, and South Africa) is an important grouping bringing together the major emerging economies of the world.

It comprises of (According to World Bank data of 2019):

BRICS countries have been the main engines of global economic growth over the years.

Over some time, BRICS countries have come together to deliberate on important issues under the three pillars of political and security, economic and financial, and cultural and people-to-people.

The acronym BRICS was initially formulated in 2001 by economist Jim O’Neill, of Goldman Sachs, in a report on growth prospects for the economies of Brazil, Russia, India, and China which together represented a significant share of the world’s production and population.

In July 2006, the leaders of BRIC (Brazil, Russia, India, and China) countries met for the first time in St. Petersburg, Russia, on the margins of the G8 Outreach Summit.

Shortly afterward, in September 2006, the group was formalized as BRIC during the 1st BRIC Foreign Ministers’ Meeting, which met on the sidelines of the General Debate of the UN Assembly in New York City.

After a series of high-level meetings, the 1st BRIC summit was held in Yekaterinburg, Russia on 16 June 2009.

At the fourth BRICS Summit in New Delhi (2012), the leaders of BRICS considered the possibility of setting up a new Development Bank to mobilize resources for infrastructure and sustainable development projects in BRICS and other emerging economies, as well as in developing countries.

At the fifth BRICS summit in Durban (2013), the leaders agreed on the feasibility of establishing the New Development and agreed that the initial contribution to the Bank should be substantial and sufficient for it to be effective in financing infrastructure.

Fortaleza Declaration: During the sixth BRICS Summit in Fortaleza (2014), the leaders signed the Agreement establishing the New Development Bank (NDB).

The NDB became fully operational in 2016 with headquarters established in Shanghai.

Each member holds an equal amount of shares (20%) in the NDB.

Key Areas of operation of the NDB are:

The BRICS Contingent Reserve Arrangement (CRA) is a framework for protecting against global liquidity pressures.

This includes currency issues where members’ national currencies are being adversely affected by global financial pressures.

The CRA is generally seen as a competitor to the International Monetary Fund (IMF) and along with the New Development Bank is viewed as an example of increasing South-South cooperation.

It is being considered more seriously as post-Ukraine war, Russia has been frozen out of SWIFT.

The theme for India’s Chairship was ‘BRICS @ 15: Intra-BRICS Cooperation for Continuity, Consolidation, and Consensus’.

The 14th BRICS Summit was convened under the Chairship of China on 23-24June 2022, in a virtual format.

Key issues in the global context, including the reform of the multilateral system, the COVID-19 pandemic, and global economic recovery, were also discussed amongst others.

BRICS 2023 is scheduled to be held in South Africa.

BRICS countries are influential members of leading international organizations and agencies, including the UN, the G20, the Non-Aligned Movement, and the Group of 7.

They are also members of various regional associations:

The big three economies in the BRICS- Russia, China, and India- represent the major emerging global markets making them relevant across continents.

The ongoing crises like the Russia-Ukraine conflict, previously the Doklam standoff between India and China, have shown that the political relationships between BRICS can be disturbed at any instance.

But the grouping needs to move forward according to its foundational principles that are, respect for sovereign equality and pluralism in global governance are liable to be tested as the five member countries pursue their national agendas.

The relevancy of the grouping needs to be ensured in the coming decades which will probably be marred with more challenges. BRICS must reaffirm their commitment to a multi-polar world that allows for sovereign equality and democratic decision-making.