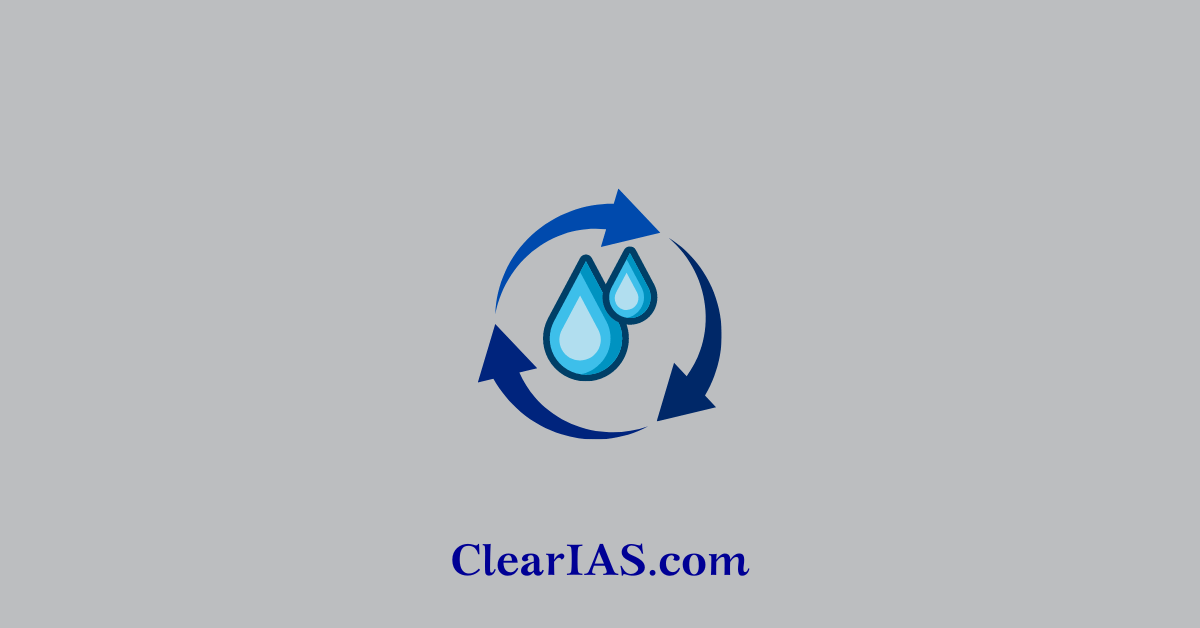 The hydrologic cycle, also known as the water cycle, explains the journey taken by water molecules as they go from the surface of the Earth to the atmosphere and back again, occasionally going below the surface. Read here to learn more about the cycle.

Hydrology is the name of the branch of science that studies the water cycle in the context of physical geography. It is focused on the global origin, distribution, and characteristics of water.

A constant exchange of moisture occurs between the oceans, the atmosphere, and the land in this enormous system, which is propelled by energy from the Sun.

The hydrologic cycle involves the continuous circulation of water in the Earth-Atmosphere system.

At its core, the water cycle is the motion of the water from the ground to the atmosphere and back again.

The nine basic physical processes that make up the continuum of water movement can be used to define the global water cycle.

According to studies, over 90% of the moisture in our atmosphere comes from the evaporation of oceans, seas, and other bodies of water (lakes, rivers, and streams), which is the process by which water transforms from a liquid to a gas.

Plants release the majority of the remaining 10% that is found in the atmosphere through transpiration. Water is absorbed by plants through their roots, and it is then expelled through tiny pores on the underside of their leaves.

In addition, a tiny amount of water vapor is released into the atmosphere as a result of sublimation, which is the direct transformation of water from a solid (ice or snow) to a gas.

When the temperature remains below freezing, sublimation causes snow banks to gradually diminish.

Stages of the hydrologic cycle

Evaporation, condensation, precipitation, interception, infiltration, percolation, transpiration, runoff, and storage are a few of the processes.

A material changes from a liquid to a gas through evaporation. In meteorology, water is the element that concerns us the most.

The process of evaporation needs the energy to occur. The sun, the atmosphere, the planet, or anything on the earth like people are all potential sources of energy. Everyone has first-hand experience with evaporation.

The body sweats, secreting water onto the skin when it becomes hot due to the atmospheric temperature or due to exertion. The idea is to get the body to use its heat to make the liquid evaporate, taking the heat out and cooling the body. It has a similar effect to what you experience after exiting a shower or swimming pool.

Water from plants evaporates through stomata during transpiration.

The atmosphere’s humidity and the soil’s moisture content play a significant role in controlling the passive process of transpiration in the majority of plants.

Only 1% of the water lost during transpiration by a plant is utilized for the plant’s growth. 99.9% of it is released into the atmosphere.

Condensation is the process by which atmospheric water vapor transforms into a liquid state. Condensation in the atmosphere can take the form of clouds or dew.

It is the temperature that causes the air to become saturated if it is cooled to that point. Water vapor condenses with any further cooling. When the dew point and air temperature are the same, foggy conditions frequently develop.

Condensation is the opposite of evaporation. Since water vapor has a higher energy level than that liquid water, when condensation occurs, excess energy in the form of heat energy is released. This release of heat aids in the formation of hurricanes.

When the tiny condensation particles grow too large through collision and coalescence for the rising air to support, they form precipitation and fall to the ground. There may be precipitation in the form of snow, sleet, hail, or rain.

On Earth, precipitation is the main source of fresh water. Overland and oceans alike, the world receives roughly 38 1/2″ (980 mm) of precipitation per year.

When the earth is saturated and there has been a lot of precipitation, runoff occurs (cannot absorb any more water). Runoff causes rivers and lakes to form. Although some runoff evaporation occurs in the atmosphere, most of the water in rivers and lakes flows back into the oceans.

Evaporation is the sole way for runoff water to return to the atmosphere if the lake is the only place where it flows (there is no exit for the water to flow out of the lake). Salts or contaminants are left behind as water evaporates. The lake then turns salty, much like the Great Salt Lake in Utah or the Dead Sea in Israel.

This runoff evaporates into the atmosphere, restarting the hydrologic cycle.

In the planetary water cycle, water is stored primarily in three different places- the sky, the earth’s surface, and the ground.

From one area of the earth to another, water that is stored in the atmosphere can be transported rather quickly.

The kinds of storage that take place on the surface of the land and underground mostly depend on the geologic factors associated with the different kinds of soil and rocks that are present where the storage is taking place.

Water can travel erratically through the eight additional primary physical stages of the water cycle.