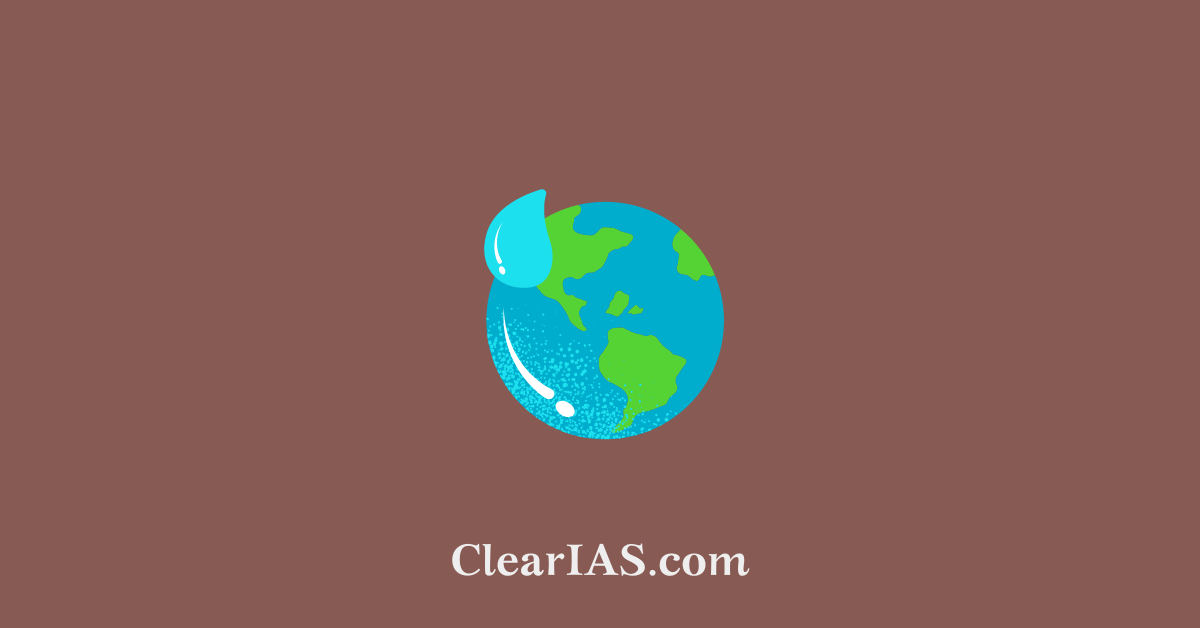 The first annual State of Global Water Resources Report was launched by WMO. The report was published to assess the effects of climate, environmental and societal change on the Earth’s water resources. Read here to learn the key findings of the report.

Most calculations indicate that between 94 and 97 percent of the water on Earth is seawater stored in the oceans.

The remaining 3-6% contain all freshwater resources. A small percentage (less than 0.1%) of this is surface water, which is found in rivers, lakes, reservoirs, the atmosphere, and all living things. About half of this is frozen in snow, glaciers, and icecaps.

Water is constantly circulating between the oceans, continents, and atmosphere in a system called the hydrologic cycle. This circulation is driven by a combination of the energy from the sun, geological processes, and gravity.

Most of the world’s freshwater is not easily accessible to humans.

That leaves only about one percent of Earth’s freshwater readily available for human use.

Unfortunately, the available surface freshwater is not equally distributed throughout the world.

This lack of water affects people’s access to clean, usable water, as well as the economic development and geopolitics of different areas.

WMO has published its first State of Global Water Resources report to assess the effects of climate, environmental and societal change on the Earth’s water resources.

This annual stocktake aims to support the monitoring and management of global freshwater resources in an era of growing demand and limited supplies.

The report gives an overview of river flow, as well as major floods and droughts.

The report underlined that large parts of the world were drier than normal in 2021 with cascading effects on economies, ecosystems, and our daily lives.

The year saw precipitation patterns largely influenced by climate change and the La Nina event. The general observations in the report are:

Region-wise findings of the report

In Africa, major rivers such as the Niger, Volta, Nile, and Congo had below-average water flow in 2021.

There were above-normal river volumes in some North American basins, the North Amazon and South Africa, as well as in China’s Amur river basin, and northern India.

The impacts of climate change are often felt through water – more intense and frequent droughts, more extreme flooding, more erratic seasonal rainfall, and accelerated melting of glaciers are some of the cascading effects.

Aside from river flow variations, overall terrestrial water storage was classified as below normal on the west coast of the United States, in central South America and Patagonia, North Africa and Madagascar, Central Asia and the Middle East, Pakistan, and North India.

It was above normal in Central Africa, northern South America – specifically the Amazon Basin – and northern China.

The cryosphere – namely glaciers, snow cover, ice caps, and, where present, permafrost – is the world’s biggest natural reservoir of freshwater.

The year saw river flooding and flash floods due to glacier lake outbursts.

Recommendations in the report

There is insufficient understanding of changes in the distribution, quantity, and quality of freshwater resources, The State of Global Water Resources report aims to fill that knowledge gap and provide a concise overview of water availability in different parts of the world.

The idea is to inform climate adaptation and mitigation investments as well as the United Nations campaign to provide universal access in the next five years too early warnings of hazards such as floods and droughts.

The recent UN climate change conference, COP27, urged governments to further integrate water into adaptation efforts, the first-time water has been referenced in a COP outcome document in recognition of its critical importance.