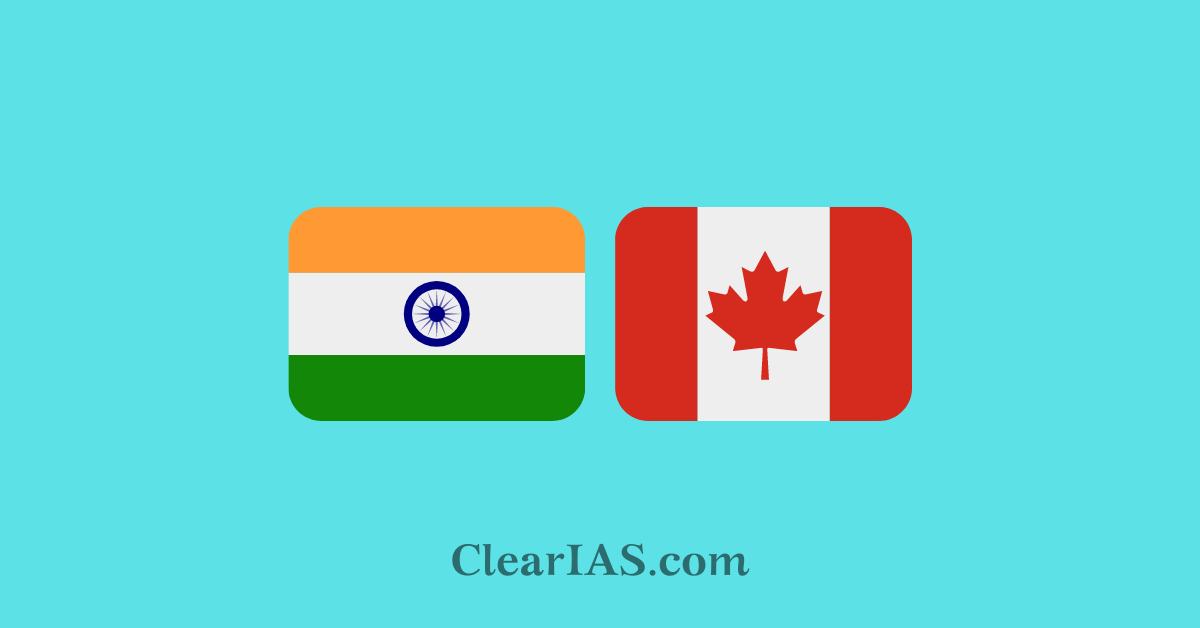 India-Canada bilateral ties are based on the shared values of democracy. Read here to know more about the history of the bilateral ties.

India established diplomatic relations with Canada in 1947. India and Canada have a longstanding bilateral relationship based on shared democratic values, the multi-cultural, multi-ethnic, and multi-religious nature of the two societies, and strong people-to-people contacts. In recent years, both countries have been working to enhance bilateral cooperation in several areas of mutual importance.

Canada’s aid program to India began in 1951 and grew substantially under the Colombo Plan. Canada provided food aid, project financing, and technical assistance to India. In the past five decades, India has been one of the largest recipients of Canadian bilateral aid.

1974 saw the deterioration of India-Canada relations due to India’s Smiling Buddha nuclear test.

The Canadian government severed bilateral nuclear cooperation with both India and Pakistan in 1976 after claims that the fissionable material used to construct India’s first nuclear device had been obtained from the Canadian-supplied CIRUS nuclear research reactor.

After this Canada only engaged in nuclear cooperation only with countries that signed the Treaty on the Non-Proliferation of Nuclear Weapons (NPT) and the Comprehensive Nuclear-Test-Ban Treaty (CTBT), and which instituted full-scope safeguards on their nuclear energy programs under the supervision of the International Atomic Energy Agency (IAEA).

1985: The bombing by Sikh separatists of Air India Flight 182 resulted in Canada and India maintaining a bilateral dialogue on anti-terrorism, including an annual meeting of the Canada-India Strategic Dialogue, as well as regular meetings of the aforementioned Canada-India Working Group on Counter-Terrorism.

Over the years, events like the liberalization of the Indian economy have attracted the Canadian business class and government, thus establishing a continuous relationship.

Canada is home to one of the largest communities of Indian origin, with approximately 4% of Canadians being of Indian heritage (1.4 million people).

The deep cultural and political ties between Canada and India are strengthened by a growing network of official dialogues, agreements, memoranda of understanding, and working groups.

At the Ministerial level, Canada and India enjoy a strategic partnership underpinned by Ministerial Dialogues on foreign policy, trade and investment, finance, and energy.

At the official level, there are regular working groups that focus on counter-terrorism, security, agriculture, education, science, technology, etc.

India is a key partner as Canada strengthens its economic links to the Indo-Pacific under a new, comprehensive strategy for the region.

Canada and India are working toward a Comprehensive Economic Partnership Agreement and a Foreign Investment Promotion and Protection Agreement (FIPA), and are committed to regularly holding Ministerial Dialogue on Trade and Investment to explore ways to deepen the commercial relationship.

Major Items of Indian Exports are:

Major items of Canada’s export to India are:

In the Education field, the Shastri Indo-Canadian Institute (SICI) was founded in 1968 to promote academic relations mainly through funding research and linking academic institutions in the two countries.

To develop effective responses to today’s most pressing global challenges, Canada and India work closely in multilateral fora, such as:

Also, as both countries are members of the Commonwealth of Nations, Canada and India exchange high commissioners rather than ambassadors.

The International Development Research Centre (IDRC) continues to have an active presence in India with projects focusing on:

Indo-Canadian Science and Technology cooperation has been primarily focused on promoting Industrial Research and Development which has potential for application through the development of new Intellectual property processes, prototypes, or products.

Department of Earth Science and Polar Canada has started a program for the exchange of knowledge and scientific research on Cold Climate (Arctic) Studies.

The growing economy of India offers immense opportunities to the consumer population of Canada. The G-7 country has an advanced and resource-rich economy which will be a good relationship for India to uphold.

India-Canada cooperation in the energy sector is something that should be explored further. India’s energy needs are increasing day by day, and Canada can serve as a reliable energy source.