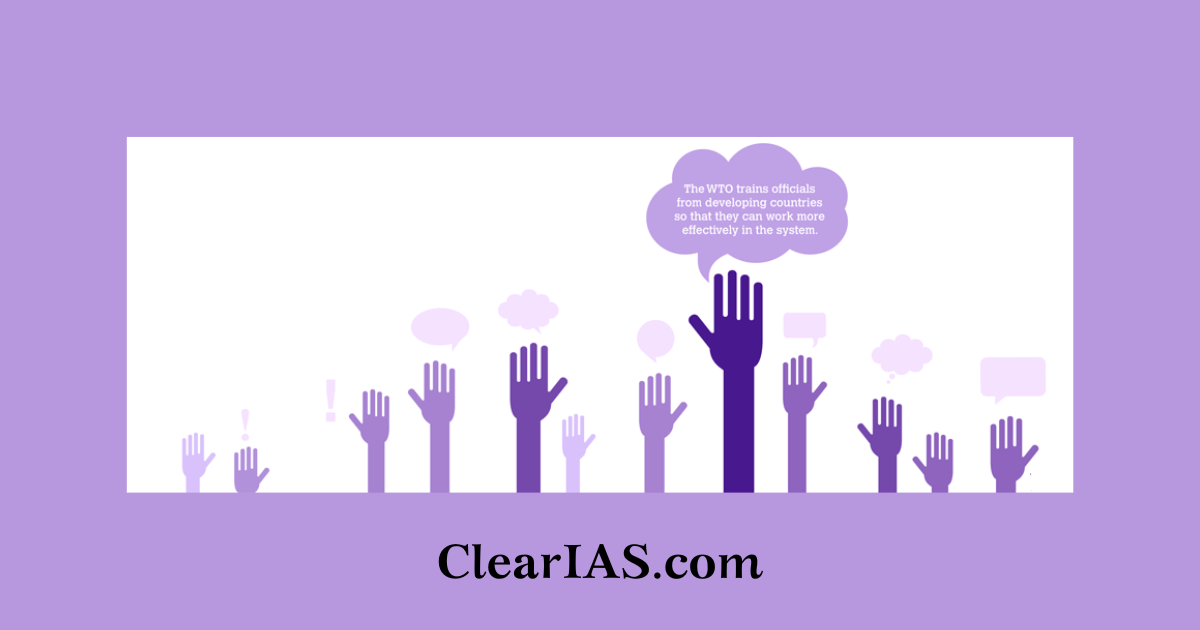 What is WTO? Why is it important for developing nations? How Doha round is related to this? To answer these questions, read further.

The World Trade Organization (WTO) is an intergovernmental body that governs and promotes between countries.

The WTO is the largest international economic organization in the world. It has 164 members that account for more than 98% of global commerce and GDP.

However, other members have the right to object to a member’s choice to use a provision that is available to developing nations.

The major area of concern among developing countries is agriculture negotiations.

Agriculture is a matter of International Trade. It has been introduced in the Uruguay round of talks.

These negotiations are the major issues in the Doha round of talks.

It is a major area of concern for developing countries as it is the main commodity they export. It is the major export of the forex and generates resources for poverty alleviation.

What is the challenge?

Doha round of talks:

The fourth ministerial conference in 2001 led to the adoption of the Doha development agenda.

This adoption was considered a victory for developing countries. The developed countries adopted the agenda because the Doha talks happen after the 2001 incident. The international community wanted to show that nations are together in the fight against terrorism.

What is the unique feature of the Doha round?

At Doha, member countries accepted the principle of special and differential responsibility.

In WTO, agricultural negotiations are going on under three pillars:

The theme of negotiations:

Market access means reducing barriers. There can be two types of barriers, tariff and non-tariff.

Even when developed countries have reduced tariffs. It has not been possible for developing countries to increase their export.

The reason is that developed countries impose non-tariff barriers. For example, sanitary and phytosanitary measures.

The imposition of anti-dumping duty is also without transparency. Even developing countries use such protectionist measures. For example, India even uses quantitative restrictions.

In the context of market access, there is a lack of consensus over two measures, special safeguard measures and special products.

The products should have a linkage with rural development, employment, and livelihood concern.

However, the problem lies in the number of items. The developing countries want to keep as many items as possible.

Domestic support: Domestic support is the most controversial issue. The developed countries continue to maintain huge subsidies. Whereas there have been many restrictions on the subsidies given by developing countries.

One of the worst impacts of the WTO policy has been that it adversely impacted not only agriculture which is the backbone of the economy but even food security.

It is the impact of WTO policies on agriculture that agriculture is stagnating and showing negative trends.

Since WTO policies have come into existence the number of farmer’s suicide has increased. The problem of Hunger and malnutrition has become acute. Due to this in India, there has been a surge in left-wing extremism.

Domestic subsidies are classified into 3 boxes:

Green box: They are not considered as trade distorting and hence there are no limitations. They are primarily meant for research and development.

Amber box: The subsidies which result in increased production are in the Amber box. They are considered trade-distorting and hence there are limitations on these subsidies. They were primarily used by developing countries.

The leaders of the developing countries feel that the developed countries have fooled them. They played with the boxes and shifted their subsidies from the Amber box to the green box.

And developing countries lacked enough expertise to understand the technicalities of such agreements.

How has WTO affected food security?

These so-called equal voting rights have not benefited developing countries because the developed countries use various bargaining tools like green room diplomacy.

The mechanism could be employed only by well-off countries.

Still, it is important to note that the success of WTO is in the interest of the developing countries subject to the condition they can retain solidarity.

Multilateralism is always better because in a Bilateral Framework, developing countries especially small countries do not have bargaining power. It is also very important for India.

Only through WTO India can get a favorable trade environment.