What is the process of government budgeting in India? What are the constitutional requirements regarding the annual financial statement?

How knowledgeable are you regarding the government budgeting process of India?

In this post, we explain the basics of Indian Budget and Government Budgeting process for beginners.

What exactly is a budget?

Thus, the budget can be defined as the most comprehensive report of the government’s finances in which revenues from all the sources and outlays for all activities are consolidated.

In simple terms, the budget is an annual financial statement of the revenue and expenditure of a government.

Budget in the Indian Constitution

The term ‘Budget’ is not mentioned in the Indian Constitution; the corresponding term used is ‘Annual Financial Statement’ (article 112).

What are the constitutional requirements which make Budget necessary?

The Fiscal Responsibility and Budget Management (FRBM) Act was passed by the Indian Parliament in 2003 for better budget management.

The FRBM act also provided for certain documents to be tabled in the Parliament of India, along with Budget, annually with regards to the country’s fiscal policy. 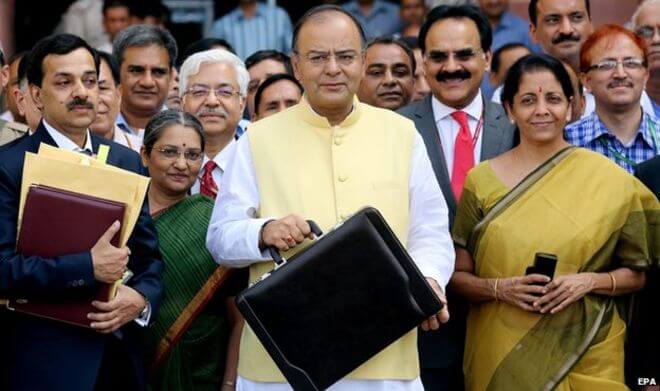 Do you know that the Annual Financial Statement is only one of the several budget documents presented by the Finance Minister?

The Budget documents presented to Parliament comprise, besides the Finance Minister’s Budget Speech, the following:

There are also other related documents like Detailed Demands for Grants, Outcome Budget, Annual Reports and Economic Survey presented along with the budget documents in Parliament.

PS: The documents shown at Serial 1, 2, 3 and 4 are mandated by Art. 112,113, 114(3) and 110(a) of the Constitution of India respectively, while the documents at Serial 6,7, 8 and 9 are presented as per the provisions of the Fiscal Responsibility and Budget Management Act, 2003. Other documents are in the nature of explanatory statements supporting the mandated documents with narrative or other content in a user-friendly format suited for quick or contextual references. Hindi version of all these documents is also presented to Parliament.

Do figures related to Railways find mention in Annual Financial Statement or are they part of only Railway budget?

Until 2016 (for 92 years), the budget of the Indian Railways was presented separately to Parliament and dealt with separately. Even then the receipts and expenditure of the Railways formed part of the Consolidated Fund of India and the figures relating to them are included in the ‘Annual Financial Statement’.

The last Railway Budget was presented on 25 February 2016 by Mr. Suresh Prabhu.

Since 2017, Railway Budget is merged with the Union Budget.

In India, the Budget is presented to Parliament on such date as is fixed by the President.

However, since 2017, the Indian Budget is presented on 1 February. As a convention, Economic Survey is also tabled in the Parliament – one day prior to budget submission, ie on January 31.

Note: In an election year, Budget may be presented twice — first to secure Vote on Account for a few months and later in full.

The discussion on the Budget begins a few days after its presentation.

If the Parliament is not able to vote the entire budget before the commencement of the new financial year (ie. within 1 month or so), the necessity to keep enough finance at the disposal of Government in order to allow it to run the administration of the country remains. A special provision is, therefore, made for “Vote on Account” by which Government obtains the Vote of Parliament for a sum sufficient to incur expenditure on various items for a part of the year.

Vote on Account is a special provision by which the Government obtains the Vote of Parliament for a sum sufficient to incur expenditure on various items for a part of the year, usually two months.

Vote on Account was widely used along with every budget before 2016 when the date of the budget presentation was the last day of February. Now vote on account is used only in special years like the election years (used along with interim budget).

Vote on Account deals only with the expenditure part. But the interim budget, as well as full budget, has both receipt and expenditure side.

So presentation and passing of vote on account is the first stage in the budget passing process. Vote on Account is necessary for the working of the government until the period the full budget is passed.

The Budget Speech of the Finance Minister is usually in two parts. Part A deals with the general economic survey of the country while Part B relates to taxation proposals.

He makes a speech introducing the Budget and it is only in the concluding part of his speech that the proposals for fresh taxation or for variations in the existing taxes are disclosed by him.

The ‘Annual Financial Statement’ is laid on the Table of Rajya Sabha at the conclusion of the speech of the Finance Minister in Lok Sabha.