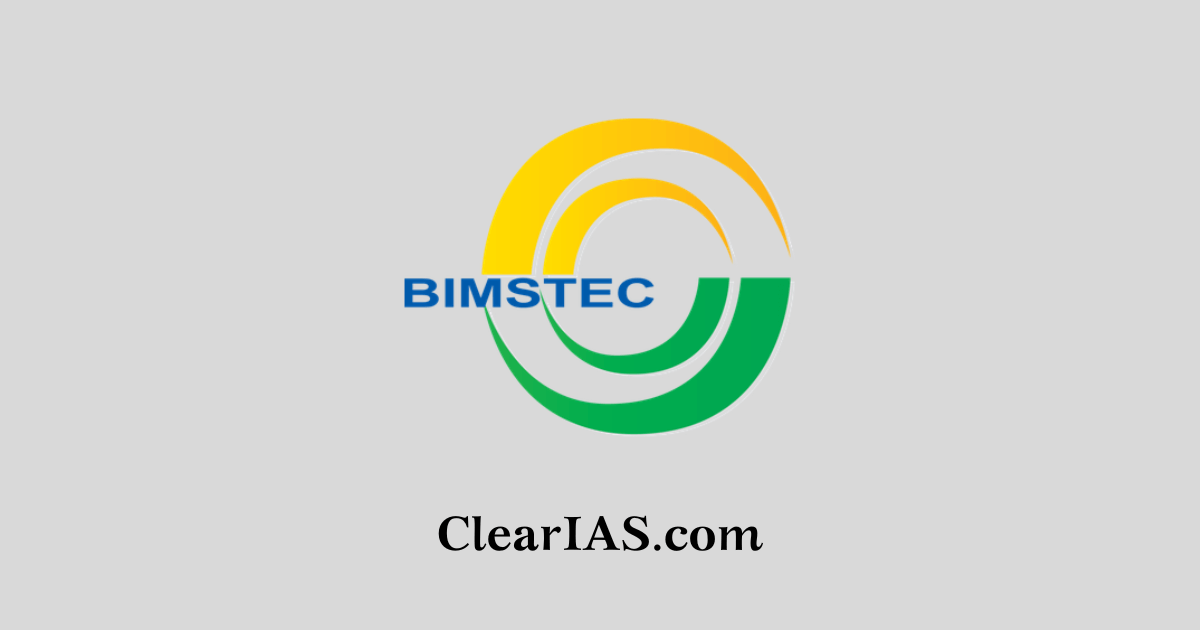 What  is BIMSTEC? What is the purpose of this institution? What are the institutional mechanism? What is the significance and the issues? To answer all these, read further.

The Bay of Bengal Initiative for Multi-Sectoral Technical and Economic Cooperation (BIMSTEC) is an international organization of seven South Asian and Southeast Asian nations, housing 1.73 billion people and having a combined gross domestic product of US$4.4 trillion (2022).

Five of the seven members—including Bangladesh, Bhutan, India, Nepal, and Sri Lanka—are from South Asia. Southeast Asia is the home of both Thailand and Myanmar.

BIMSTEC comprises those countries that border or are located near the Bay of Bengal and rely on it. It was established on June 6th, 1997, as a result of the Bangkok Declaration. It is based in Bangladesh’s capital city of Dhaka.

Since it is a sector-driven organization, BIMSTEC is distinct from other regional organizations like SAARC  or ASEAN.

The Great Himalayas and the Bay of Bengal ecologies are also linked by BIMSTEC, in addition to South and Southeast Asia.

BIMSTEC was established as an alliance to combat the negative consequences of globalization by leveraging the physical proximity of the world’s fastest-growing economies and utilizing local resources.

South Asian and South East Asian nations working together economically and technologically along the Bay of Bengal coast.

The alliance strengthens ties between the seven nations and serves as a link between South Asia and South-East Asia.

The highest policy-making body in the BIMSTEC process is the BIMSTEC Summit, which is composed of the heads of state or government of the member states.

The External Ministers of Member States participate in the Ministerial Meeting, the second highest policy-making body of BIMSTEC.

Every month in the BIMSTEC Secretariat in Dhaka, the BIMSTEC Working Group is attended by the ambassadors of the BIMSTEC Member Countries to Bangladesh or their representatives.

The two key forums to guarantee the private sector’s active engagement are the Business Forum and the Economic Forum.

The primary goal of India’s Look East strategy was first implemented in 1991 and later renamed Act East policy in 2014.

It is to advance strategic, cultural, and economic ties with the Asia and Pacific area.

The inclusion of these Asian nations gives India the chance to advance its act East policy objectives.

To kick off a wave of port-led development along India’s coastline, the Sagarmala project was created.

All of this will result in a booming economy in the coastal states of India, and India will undoubtedly benefit from the presence of developing market economies in the region in the shape of this grouping.

Around 1.5 billion people live in the BIMSTEC region, which accounts for around 22% of the world’s population and offers a sizable market.

BIMSTEC member states, which have a total gross domestic product (GDP) of 3.8 trillion, have been able to maintain an average 6.5% economic growth trajectory in recent years and exhibit strong development potential.

With an annual fish catch of about six million tonnes, or 7% of the global catch, and a market value of about $4 billion, it is also a significant fishing location.

The association offers the northeastern states of India the chance to prosper economically by connecting them to the Bay of Bengal region via Bangladesh and Myanmar.

Due to the expansion of China’s Belt and Road Initiative, the grouping enables India to fight China’s encroaching influence in nations along the Bay of Bengal.

India aims to be a world power and “Vishwaguru,” and by using this platform, India can demonstrate to the rest of the world its outstanding leadership’s innate abilities to establish a new global order.

However, only five summits have been held in the 25 years leading up to 2022, demonstrating a lack of continuity in the meetings.

A strong BIMSTEC requires friendly and calm bilateral relations among all of its member states.

Given the development of relations between Bangladesh and Myanmar, India and Sri Lanka, and India and Nepal in recent years, this has not been the case.

Disappointingly, there is a lack of connectedness in the institutions of the infrastructure, energy, digital, and financial sectors that connect individuals for travel, trade, and cultural exchanges.

Despite the implementation of the Asian Development Bank-supported Master Plan for Transport Connectivity, little progress has been made thus far (ADB).

Ocean governance hasn’t been a high-priority problem for the member states, despite the Bay’s essential role in the economies of the BIMSTEC countries.

The majority of these member states still have obsolete colonial rules in place that regulate the area’s waters.

In the Bay, illegal activities like drug trafficking, human trafficking, and terrorism are all quite prevalent.

Large amounts of untreated waste are entering the Bay as a result of industrial expansion in coastal areas.

Due to the leaching of plastic and untreated trash from rivers and the Indian Ocean, a dead zone with no oxygen where no fish can survive is beginning to form.

The 14 areas of cooperation included in BIMSTEC’s focus, which is fairly broad, include things like connectivity, public health, agriculture, etc. It is advised that BIMSTEC stick to its limited areas of specialization and work well with them.

Due to the development of another sub-regional initiative, the Bangladesh-China-India-Myanmar (BCIM) Forum, which actively includes China as a participant, more concerns have been raised about BIMSTEC’s unique potential.

To facilitate trade between the member nations, the draft of the BIMSTEC Coastal Shipping Agreement was designed to simplify coastal shipping within 20 nautical miles of the coastline.

The cost-efficient, environmentally friendly, and quicker coastal shipping routes will be used for much of the freight traffic between the member nations once the agreement is operational when it is ratified.

The three factors which shape the formation of any Regional organization are the market economy, the movement of people across the border, and the political factor. All of these are missing. Instead of a trade deficit, there is a trust deficit.

There is a need to increase the regional integration and cooperation in this scenario. BIMSTEC should focus on new areas such as the blue economy, the digital economy, etc.

India will need to take the initiative in mitigating any concerns about interorganizational power imbalances among the smaller members and work to promote greater cross-border connectivity and the flow of investments by lowering barriers to the movement of people and goods in order to realize its trade and economic potential.